Risbygate’s first pair of Asa Sumner-Keens & Tom Taylor won 4 sets out of 4.  7-6, 6-3 against Royston’s first pair, coming back from a break down at 5-6 and saving a set point at 5-6 in the tiebreak to win that crucial first set tiebreak 9-7 with some fantastic tennis.  They easily beat their second pair 6-0, 6-3.

Risbygate’s second pair of Nick Porter and Gary Keens won 2 sets and lost 2 sets, disappointingly losing the first set against the Royston first pair 5-7 from 5-2 40-30 up, but beating the second pair 6-3, 7-5, with Nick Porter holding serve to love at 6-5 up against their second pair in the crucial set that clinched the 5th rubber and won Risbygate the cup. 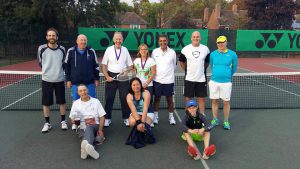 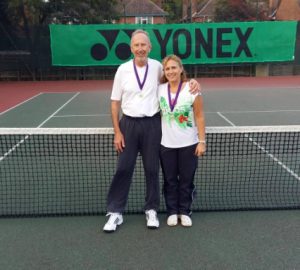 In lovely weather, 20 players turned out for an American Tournament on Saturday, 30th September.  Genella Kingham was the runaway winner in the ladies’ competition, dropping just 5 games over the course of the afternoon.  The men’s competition was tighter with Andrew Willis taking it by one game from Martin Wright.  Congratulation to them both and thanks to all who came down (especially those who brought food!). 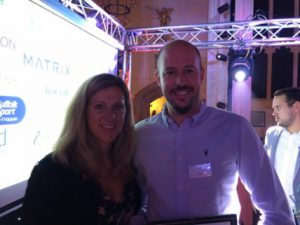 Paul Hope, Risbygate’s Tennis Coach, rounded off a successful first season at the Club by being named the Coach of the Year at the recent West Suffolk Sports Awards Evening.

Paul beat off strong competition including the head coach of the U16 Girls Basketball team who reached the 2017 National Championships and also a karate teacher with over 30 years experience.

Paul says he is looking forward to building on this strong start at Risbygate with a comprehensive winter coaching programme. For further details contact Paul direct on 07879 498341 or email paulhope555@gmail.com

Well done to everyone, and also huge thanks to the hard-working team captains: Gary King (men), Ashley Dobson (18U), Gregor Miller (16U), James Osgood (14U) and Paul Hope (12U). 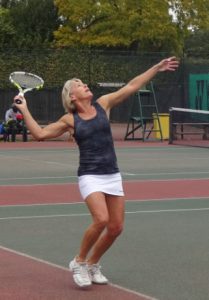 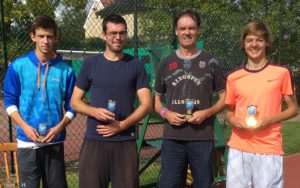 Risbygate Tennis Club Finals Day produced some high class tennis and moments of drama but injuries and the weather had an impact.

The Men’s Singles Final between 18 year old Nils Klermund and 16 year old Adam Levey had the potential to be a really close and exciting hard-hitting match.  However it soon became clear that a back injury Levey had picked up in his semi final was going to limit his ability to stay in the game.  Levy hit some flashing winners to try to win the points quickly but Klermund was always in control with his own power game working well and he ran out a comfortable straight sets winner.
The Ladies Singles Final featured two players who had both won the event before.   Jo Harper, a three time champion started strongly against last year’s winner Genella Kingham and took the first set 6 -2.  But slowly Kingham’s fighting spirit gathered pace and she won a close second set 6 – 4.  At 4 all in the third and with 2 1/2 hours on the match clock, it was too close to call. But then Kingham went down with a severely cramped calf muscle and was unable to continue, handing the victory to Harpur for the fourth time.

This also affected the Ladies Doubles Final as Kingham and her partner Gail Corcoran had to withdraw giving Salome Smit and Jo Harpur a walkover.

The Men’s Doubles Final was an eagerly awaited contest. The father and son pairing of Gary Keens and Asa Sumner-Keens were taking on Nils Klermund and Tom Taylor. This promised to be a match of high quality hard hitting serve and volley tennis.  The father and son partnership just had more consistency on the big points and took a keenly fought first set 6 – 1. However the second set was much tighter with each player holding serve until 6 all. But in the tie break, Gary Keens employed all his experience and he and his son took it easily to wrap up an entertaining match 7 – 6. The Mixed Doubles Final was started but, at 2 all in the first set, had to be abandoned due to rain and will be played later.