From folk to pop, via easy listening, blues, rock and jazz, The Apex has a plethora of acts booked in for Spring 2018.

On 16 January, some of Britain’s leading folk musicians (Bellowhead and Faustus members, Nancy Kerr and The Young’uns) come together for a timely re-telling of Peter Bellamy’s legendary folk ballads, The Transports.

Folk fans will also be delighted to hear that Ashley Hutchings revisits Fairport Convention on 31 January, Fairport Convention themselves will return on 23 February, The Fisherman’s Friends will bring their shanty-style choral singing on 8 February, and the ‘Voice of Clannad’, Moya Brennan graces the stage on 23 March 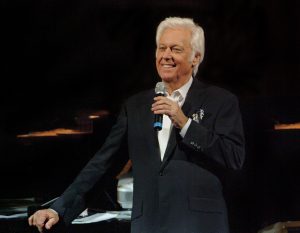 Celebrated crooner, Jack Jones (pictured above) returns on 26 January, as part of his 80th Birthday Celebration Tour, while the songs of Andy Williams are celebrated by Jimmy Osmond on 7 February;Jimmy’s show includes easy-listening classics such as ‘Music To Watch Girls By’, ‘Happy Heart’, ‘Can’t Take My Eyes Off You’ and ‘Moon River’, along with some of the chart-topping hits that made global stars out of Jimmy and his brothers. 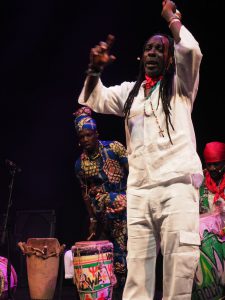 World music fans can enjoy drums, poetry and trance from Haiti on 26 February. Traditional Haitian ‘roots music’ ensemble Chouk Bwa Libète (pictured above) play music which rises in waves of percussion, vocals and dance and have already ignited audiences at major festivals around the world, including Roskilde and WOMAD.

Rock n roll pioneer Joe Brown performs a solo show on 28 February, and For Those About To Rock on 2 March sees high voltage rock from LIVE/WIRE’s tribute to AC/DC and Limehouse Lizzy’s Thin Lizzy tribute.

And, of course, there’s plenty of pop music to talk about…

Europe’s most successful exponents of retro-inspired rock & roll, Showaddywaddy (pictured above) return on 24 February. There will be another 60s Hits and Laughter Show on 25 February, this time featuringThe Merseybeats, The Union Gap and Cupid’s Inspiration. Original members of Hot Chocolatewill play all their greatest hits on 31 March.

The Chicago Blues Brothers bring the best songs from the Blues Brothers films on 18 January; Boogie Night 7 on 19 January sees Celebrate recreating Kool And The Gang, Sing Baby Sing (The Stylistics) and Nat Augustin’s Stevie Wonder Legacy; Nearly Dan promise all the Steely Dan favourites on 20 January; Clive John’s Johnny Cash Roadshow returns on 21 January; The Simon & Garfunkel Story returns on 28 January; Barry Steele is back with The Roy Orbison Story on 2 February; T.Rextasy return on 17 February and former members of The Kinks are back with all their hits in Kast Off Kinks on 22 February.

But it’s not all music; there will be entertaining evenings of conversation with Frank Bruno (16 February) and Michael Parkinson (7 April) and comedy courtesy of Mark Steel (pictured above) on 15 March and Fat Cat Comedy Club on the second Sunday of the month.

For more information, or to book tickets, please telephone 01284 758000 or visitwww.theapex.co.uk. More events are being confirmed all the time –check the website to keep up to date.

Free bridge sessions at the library in Bury St Edmunds

Peregrine falcon put down after being found badly injured