Imaginative Christmas images painted on cards are set to boost the funds of two local charities in Bury St Edmunds.

They were uncovered by Rebecca Sheridan who now has 100 of them on sale at Denny Bros store, in Kings Road, Bury St Edmunds.

And costing £6 each funds from their sale will go towards the My WiSH charity, which supports the West Suffolk Hospital, and St Nicholas Hospice Care.

Rebecca, who lives in Chevington, discovered them when sorting through her grandmother’s items who died eight years ago, aged 93, and lived on Honey Hill, in Bury St Edmunds. 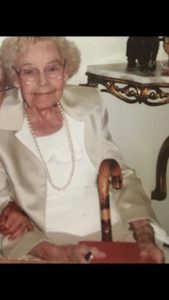 painted in her spare time and was a member of the Bury St Edmunds Art Society. She was the wife of one of the town’s elder statesman who began work in local government as a humble council clerk but went on to transform St Edmundsbury Borough Council into one of the richest in the country.

John Knight died, aged 91, back on Christmas Eve, in 2007. He was for many years leader of the council, was instrumental in a number of land deals – including the purchase of the Moreton Hall area which is now one of the town’s biggest housing and industrial estates – helping make it the wealthy authority it is today.

The former Bury mayor and well known Rotarian, who worked for the Mildenhall Internal Drainage Board for 40 years, was also awarded the coveted Freedom of Bury in 1991.

He was handed an OBE in 1976 and after his retirement from the drainage board and the borough council, instead of sitting back and enjoying a relaxing life with his wife, Joan, he threw himself into a full time university course and gained a BA in history at the age of 79.

Prior to moving to Honey Hill the couple lived in Westley Road and annually opened their home as part of the Hidden Gardens campaign.

Rebecca said: “I was sorting out some of my grandmother’s things and found some old Christmas cards that she sent out and she always did scenes of Bury. I contacted the We Love Bury St Edmunds facebook site to get some reaction and for people to recognise her work and decided to put them on sale in aid of two local charities.”

The scenes depict many familiar parts of Bury St Edmunds including the Cathedral, the Nutshell, Abbeygate Street and Churchgate Street.

Pictured above is Rebecca Sheridan with some of the cards painted by her grandmother Joan Knight.