The second imaginative and stunning design for the My WiSH Charity’s World War 1 trail in Bury St Edmunds has been revealed.

It is being created by Nigel Kaines, who runs Designs on Metal, from his workshop in Ixworth Road, Stowlangtoft, who has collaborated with Chris Carroll-Davis to produce “Shell Shock”.

It is a sculpture which uses rusted steel rods and a contorted steel plate combined with hot, bright pieces of stained glass, depicting a stylized shell explosion.

He made pieces for the successful Wolf Trail in Bury and constructed the four-metre high representation of wheat, called “With the Grain”, situated on the town’s Kings Road roundabout.

But his latest iconic piece highlights the damage which was done to so many people during the First World War by mental trauma.

He said: “It was not understood at the time so it depicts in a stylized fashion a shell explosion but it’s all about the mental impact on so many people and it has a spread of about 2 metres.

“My original idea was based around the engineering and the metalwork and the design of items during the First World War with items like tank manufacture, but whilst I have a great interest in metalwork the ideas I was coming up with I wasn’t feeling any love from, any emotion towards them, but only a week or so before the deadline I put everything away and just tried to reboot my system and I thought what were more important things than this and that’s when I started to think more along the lines of the people involved, the soldiers. Everyone could see the physical injuries but it’s the mental injuries that are difficult to understand and that took me down that avenue. 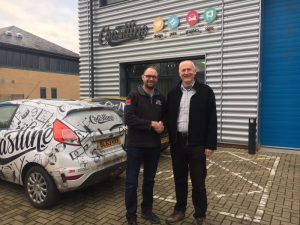 A site for the piece has yet to be decided which is being sponsored by Coastline Graphics, in Skyliner Way. The company, which also was involved in the Wolf Trail, is also supporting the whole venture with signage and support said it managing director Scott Braker who is pictured, left, above with Mr Kaines.

The trail is to commemorate the centenary of the end of World War 1 and is being supported by Our Bury St Edmunds, the business improvement organisation in the town, and also backed by the Royal British Legion.

It will feature 18 pieces, commissioned by local artists and sculptors, dotted in prime town centre sites and will be on show from July 23, through to Armistice Day, on November 11.

At the culmination of the trail an auction will take place to sell off all of the pieces with the proceeds going to the My Wish charity, which supports the West Suffolk Hospital, with the money going towards the Every Heart Matters appeal

The appeal is aiming to raise £500,000 to help fund building a brand new cardiac centre at the hospital. The West Suffolk NHS Foundation Trust is investing £5.2m in developing a state of the art cardiac suite but the £500,000 My WiSH Charity is hoping to raise will lead to the whole unit, which is currently fragmented on different floors, being brought together in one purpose-built centre.

Anyone wanting to purchase or sponsor a piece of artwork should contact the team on 01284 712952 or fundraising@wsh.nhs.uk

If you want to support the Every Heart Matters appeal go to the website www.mywishcharity.co.uk and if you would like to donate to the appeal you can do so by going to

1000th anniversary of the Abbey of St Edmund postponed until 2022