A 52-year-old man from east London has been jailed following the death of a cyclist in a fatal road traffic collision in Hitcham.

Mark Tuffs (pictured above) of Alibon Road, Dagenham, appeared before Ipswich Crown Court today, Monday, March 26, where he was sentenced to 36 weeks’ imprisonment and disqualified from driving for 16 months.

Tuffs had previously pleaded guilty to the offences of causing death by careless driving and failing to stop after a road accident. He had initially denied the charges and appeared at the crown court last month for the beginning of a trial, but then subsequently changed his plea and admitted both offences. 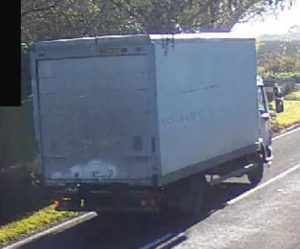 The collision occurred at around 1pm on Tuesday, November 29, 2016, when officers were called to reports that a cyclist had been struck by a vehicle which failed to stop on the B1115 Finborough Road.

The cyclist, 72-year-old Colin Taylor from Hitcham, died at the scene.

Initial police enquiries identified a property near to the collision scene had CCTV cameras installed. On reviewing this footage, officers found a white DAF lorry with “I’M HERE” written in dirt on the back, had travelled along the road around the time of the collision.

The vehicle was travelling in the general direction of having come from Stowmarket and towards Sudbury. Officers then reviewed CCTV from main routes around Stowmarket and as a result of this they identified that the same DAF lorry had made a delivery to a business in Stowmarket prior to the collision. The footage showed the lorry was undamaged at this time.

Officers also reviewed CCTV footage in the Sudbury area and were able to find the lorry travelling through the town following the collision, with the footage now showing it had sustained damage.

The vehicle was traced to a delivery firm in Barking and Mark Tuffs was identified as the driver on that day. His digital driver’s card corresponded with the vehicle’s tachograph, putting the vehicle at the scene of the collision at the relevant time and date.

The lorry was found to have sustained damage on its return to the depot, which Tuffs claimed was due to him having hit the branch of a tree. Debris left at the scene of the collision matched parts that were missing from the vehicle.

Chief Inspector David Giles, the Senior Investigating Officer into this fatal collision, said: “Mark Tuffs knew that he had struck Mr Taylor yet failed as a bare minimum to stop and check if he was ok, when he had of course been killed. He continued on his journey and then fabricated a story to his employers about having hit a tree branch to account for the damage to his truck, so as to further evidentially distance himself from the collision.

“Tuffs made no effort to report this to police and it was only the tenacity of the investigation team that identified him as the driver. Having denied responsibility throughout the investigation he ultimately pleaded guilty at the beginning of the trial, but even on that day he still tried to deny responsibility by stating that it was him driving but that he hadn’t realised he had struck Mr Taylor.

“There was a Newton hearing where it was found this account was disbelieved and the court accepted the guilty plea but only on the basis that Tuffs knew exactly what he had done. For this reason no reduction in sentence was awarded to Tuffs for his guilty plea and he will go to prison today for causing the death of Mr Taylor and I hope that this will afford some closure to his family.

“As lead investigator I would like to pay tribute to the efforts of my investigation team and to thank the media for their assistance in promoting this story as well as the public who took a significant interest in this case.”