A fundraising concert is being held in Bury St Edmunds to help raise money for the critical care unit at the West Suffolk Hospital following treatment they gave to a ladder fall victim.

It is going to be held at All Saints Church, in Park Road, on Sunday, April 22, at 2.30pm, and features the duo of Carol Skinner, on flute, and Stuart Green, on the harp. 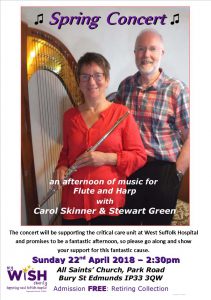 The Spring Concert has been organised to help boost the funds of the My WiSH Charity, which supports the hospital, with money raised from the event going towards the unit.

It is being held as a “thank you” to the staff for caring for Ian Payne who has received treatment at the West Suffolk since he was first admitted back in 2016.

In November 2015, he sustained a life changing injury following a fall from a ladder whilst helping a neighbour. His wife Rosy broke his fall but incurred a wedge fracture to three vertebrae.

For Ian this resulted in a traumatic brain injury. He was treated at the Addenbrookes Hospital, in Cambridge, and the West Suffolk Hospital and specialist neurological rehabilitation centres … the Colman Hospital, in Norwich, and Icanhoe Centre, in Stowmarket, for a total of 10 months before returning to a different home, adapted for his needs, in Bury, in September 2016.

Despite the severity of the injury the 63-year-old has retained his personality, sense of humour and ready wit, but he still has severe left sided weakness and is wheelchair bound.

Unfortunately he contracted C difficile last Spring and spent a further five weeks at the West Suffolk Hospital in critical care and then F12.

Rosy said: “There is no doubt that the staff there saved his life. Nevertheless, with a huge amount of personal determination and assisted by skilled health professionals, he is learning to walk again and although the road to recovery is slow, he is continuing to make progress.

“Ian’s ex-colleague from Suffolk County Music Service, Stewart Green, decided to put on a flute and harp recital for Ian and to raise money for a local charity. West Suffolk Hospital’s MyWiSH charity was chosen and in particular the critical care unit that has cared for him twice.

“Ian is on the road to recovery now and that’s down to the continuous work of the health professionals and at critical moments the West Suffolk Hospital has played an important part in this.

“He is beginning to get about a bit now and is extremely determined,” added Mrs Payne.

Pictured above are Ian and Rosy Payne