Risbygate Sports Club opened the tennis season with an American Tournament on Saturday.  It was an enjoyable day, assisted by the warm weather and lovely tea, with members mixing up and often playing with people they hadn’t met before.  Players’ ages ranged from 13 right up to late 70s! 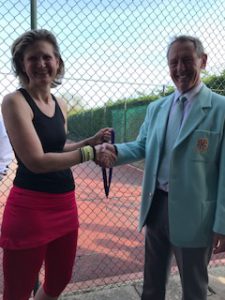 Although played in a friendly spirit, the tournament was hotly contested.  Bronwyn Keating, playing with a borrowed racquet, went into the final round in second place behind Helen Stacy, but managed to win 7 out of 8 of the games on offer to secure the win with an impressive 25 games (out of a possible total of 32).

The men’s competition was even tighter, with Stuart Lee needing to win his final matach 8-0 to catch Will Dale.  In front of the watching crowd, he rose to the occasion and so we had joint mens’ winners on 22 games each.  Risbygate Club President, Bernie Millard, was on hand to present the medals.  Congratulations!