The great niece of two servicemen killed in the First World War is one of the first people to purchase a poignant wooden poppy which is part of the serpentine trench and is a feature of the World War 1 Trail in Bury St Edmunds.

Linda Murrell has bought two of the poppies in remembrance of her great uncles Sgt Charles Grommett and his brother Pvt Ernest Grommett who both lost their lives during the conflict.

They will be situated on the trench for the duration of the trail which is launched in July and when it finishes on Armistice Day, November 11, Linda will have them to keep as momentos. 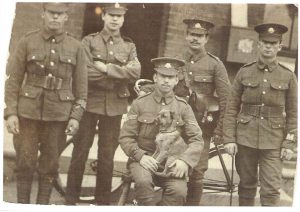 Her two great uncles had different routes into the Army with Charles, pictured above holding the dog, enlisting in Bury St Edmunds in 1907 rising through the ranks to become sergeant at the outbreak of the war.

He was specialising as a surveyor and frequently sent postcards to his younger brother Walter, Linda’s grandfather, to their family home in Downham Market.

In one to his mother from Hull, in August 1914, he said: “I am with a Territorial Staff at the Station Hotel, cannot give you any address but will you write to Edith. Fondest love to you both. Yr Son Charlie.”

He went on to marry Edith Cobb on September 1, 1914, in Beverley, in Yorkshire, before leaving for France five days later as a member of the 1stBattalion of the East Yorkshire Regiment.

Charles was part of the Expeditionary Force and on September 20 at the Battle of Aisne he was wounded in the thigh and was transported on a hospital train to St Nazaire but died of his wounds six days later. He is buried in St Nazaire Toutes-Aides Cemetery.

Meanwhile, Ernest, the eldest of the three brothers, was living in Canada and was a private in the 2ndCanadian Pioneers. He enlisted on August 3, 1915, at the age of 29.

He worked with engineers continually in the forward areas of the fighting and his work was varied consolidating positions captured by the Allies and building and keeping trenches in good repair.

However, he was killed by a bomb at an engineer’s dump in Grossville, in France, on May 22, 1918, and is buried at Bellacourt Cemetery, Riviere, south of Arras.

Sixty-five year-old Linda, who lives in Brockesby Walk, Bury St Edmunds, said: “The poppies are very significant for me and I thought it would be good to purchase one each in memory of Charles and Ernest. I wanted to do something to commemorate the end of the war.”

The trail is being organised by the My WiSH Charity and Our Bury St Edmunds, the business improvement district (BID) in the town, and they are encouraging people to purchase poppies. Contact the fundraising team on 01284 712952 or fundraising@wsh.nhs.uk or download a form by going to https://bit.ly/2xPa0pQ

It will feature 18 pieces, commissioned by local artists and sculptors, dotted in prime town centre sites and will be on show from July 21, through to Armistice Day, on November 11.

At the culmination of the trail an auction will take place to sell off all of the pieces to go to the My WiSH Charity’s Every Heart Matters appeal.

Treatt, the leading beverage ingredient solutions manufacturer based in Bury St Edmunds, will be the main sponsor for the trail, and Daemmon Reeve, group CEO, said:  “It’s fantastic to be able to support this ambitious and exciting project which remembers the bravery of those who fought in World War One and is also helping to raise the £500,000 needed to fund the brand new cardiac centre at the hospital.”

And if you want to support the Every Heart Matters appeal go to the website www.mywishcharity.co.uk and if you would like to donate to the appeal you can do so by going to: Justgiving.com/ehma or text EHMA17 £10 to 70070.

To find out more details of the trail go to www.ourburystedmunds.com/ww1trail

Pictured above is Linda Murrell at the grave of her great uncle Ernest Gromett.