Three runners who took part in the London Marathon have between them raised nearly £3,000 for the My WiSH Charity, which supports the West Suffolk Hospital, in Bury St Edmunds.

They are Will Debenham, a former Bury man who now lives in Bethnal Green, East London; serviceman Ian Ramsey, who is based at RAF Honington; and Steve Pretty, who lives in Horsecroft Road, in the town.

And they all chose different parts of the hospital to support for their efforts around the streets of the capital. 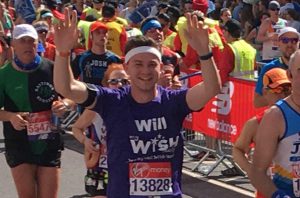 Twenty-six-year old Will, pictured above, ran the event for the first time and clocked up a time of four hours 39minutes raising £1,150 for the hospital’s neonatal ward.

He said: “My mother has worked there for over 18 years and they do amazing work to care for sick and premature babies and others that require high dependency care.

“All the money goes towards specialist equipment and additional support to ensure they can keep doing an outstanding job.

“The day itself was absolutely amazing and I loved the whole event but it was tough as it was a really hot day. However, I was quite chuffed with my time and the support I got on the route from family and friends was also amazing as they were positioned at the right points where I needed a push and motivation to get through to the end.”

Ian, pictured top with his family, was running to raise money for the orthopaedic department of the childrens’ ward where his wife Sian is a sister and completed the course in five hours eight minutes.

The 40-year-old corporal said he was keen to repay the care they received when his daughter Olivia, who is now four, was treated for a hip displacement which was diagnosed when she was two years old.

“I decided to do the run so that I could raise money for the department but I got cramp after 17 miles and had to run/walk the last part of the course. It was quite daunting to start with what with the waiting around and the warming up and stretching but once I got into it it was fine and the support we received on the route was amazing.”

It was his first ever marathon and his efforts raised a total of £1,132 and he is now planning to take part in the event next year. 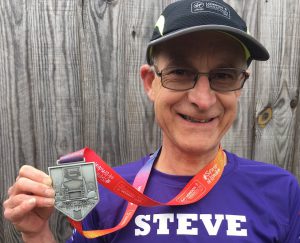 And Steve, pictured above, who is 60  and ran in the super veteran class, recorded a time of three hours and 54minutes raising £570 for the Every Heart Matters appeal which is aimed at raising £500,000 for a new cardiac unit at the West Suffolk.

He was the event director for the Nowton Park Run and it was his 10th marathon and second time in the London event.

He was also running on behalf of the park run and said: “The time is not bad considering the heat and there were a lot of collapsed people on the route but I am capable of a much faster time. It was very enjoyable. Once you decide you are not going to get the time you set, you just relax and enjoy the day.”

His next marathon is at Rutland Water, in September.