In blistering heat the 168 competitors enjoyed a great day’s golf and raised thousands of pounds for the Theatre Royal Bury St Edmunds Charity. The players came from all over the eastern region and further afield.

It was an incredible contrast from the April date the event was originally scheduled which had to be cancelled due to flooding. “Oh for a little rain” they said as temperature hit the low 30’s. The format of the competition is teams of four playing a stableford competition with the best three scores on each hole to count.

Considering the dry weather the pretty Stowmarket course was in great condition and everybody seemed delighted that the event had returned to Stowmarket after 5years away. 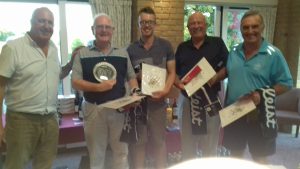 Sam Renville won the Men’s Longest Drive with a monster wack down the 403yard 5th    which finished very close to the green whilst Stowmarket’s Linda Gilham won the Ladies longest drive. John Mann went very close on the par 3 2nd hole to win the prize for “Nearest the Pin”. The 9-hole Putting competition was won by Stephen Stutters with a 14 putts that included 4 single putts.

The 2019 Theatre Royal Bury St Edmunds Golf Day will also be held at Stowmarket on Thursday April 4, 2019. If you wish to enter a team contact Ian Duncan 01359 244537 or by email Ian@club-noticeboard.co.uk  book early to avoid disappointment.