A mule’s head and a colourful 6ft high camel are two of four pieces of artwork created by Michelle Freeman as part of the World War 1 Trail, in Bury St Edmunds. 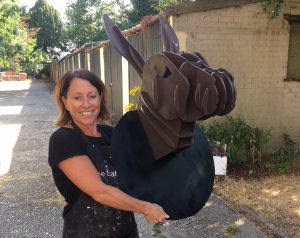 They are now both on display in the town with the mule’s head, pictured above, outside Beautiful Beers, in St John’s Street, and the camel in the Apex.

They have been made by the owner of The Crafty Foxes in support of the trail which involves a total of 18 pieces around the town and organised by the My WiSH Charity and Our Bury St Edmunds, the business improvement district (BID).

It is aiming to raise £500,000 for the charity’s Every Heart Matters appeal to help create a fully integrated cardiac centre at the West Suffolk Hospital.

The pieces on the trail, commissioned by local artists and sculptor and dotted in prime town centre sites, are on display through to Armistice Day, on November 11. At its culmination an auction will take place to sell off all of the pieces to go to the My WiSH Charity’s Every Heart Matters appeal.

Her other pieces for the trail include a horse bookcase and pigeons and she said: “These animal-themed creations aim to raise awareness of the contribution horses, camels, pigeons and mules made during the war.

“Creating four individual pieces of art has been a real challenge and hugely satisfying; working alongside talented and recognised artists gives me a real buzz.

“I have had some sleepless nights pondering over getting a 6ft papier-mache  camel into the lift at the Apex where it has gone on display.”

The lifesize camel, which is being sponsored by heart support group Upbeat,  is created out of a combination of medium-density fibreboard (MDF), disused carpet rolls, recycled plastic bottles, masking tape, wadding and 10 layers of marbled decoupage paper and glue.

The mule’s head, sponsored by Beautiful Beers, is made out of marine ply, jig-sawed and sprayed with chocolate textured suede paint.

“I guess I was thinking about the ‘wow factor’ for my pieces for the trail and the camel is crafty and is reflected in my business and I am hoping it will be popular on the trail.”

Around 80,000 donkeys and mules were recruited during the war as they could carry far more weight and were easier to maintain than horses. The downside was their braying during the night was so noisy it could reveal the troops position to the enemy. Consequently, many mules had their vocal cords removed.

Meanwhile, domesticated camels were used in battle, both for the transportation of equipment and of warriors.

The Imperial Camel Corp Brigade was a camel-mounted infantry brigade that the British Empire formed in 1916.

Camels were much easier to control than horses once they were made to kneel down and they were much less prone to panicking when exposed to enemy artillery and small fire-arms.

Another benefit was that camels could manage without water for days whereas horses needed watering daily.

Treatt, the leading beverage ingredient solutions manufacturer based in Bury St Edmunds, is the main sponsor for the trail, and Daemmon Reeve, group CEO, said: “It’s fantastic to be able to support this ambitious and exciting project which remembers the bravery of those who fought in World War One and is also helping to raise the £500,000 needed to fund the brand new cardiac centre at the hospital.”

If you want to support the Every Heart Matters appeal go to the websitewww.mywishcharity.co.uk and if you would like to donate to the appeal you can do so by going to: Justgiving.com/ehma or text EHMA17 £10 to 70070.

Pictured top is Michelle Freeman with her camel for the World War 1 Trail.