It’s a quarter of a century since Aldeburgh last carried off the Hambro Cup. Yesterday they ended this barren run with an exciting three-hole victory over Stowmarket at Bury St Edmunds.

It was an excellent final which hung in the balance all day.

Perhaps Aldeburgh were inspired by their red and yellow hooped stockings, their first suggestion of a team uniform. More likely it was that they made good use of the seven shots they received in each round and held their nerve under pressure.

Aldeburgh led by two holes at lunch but it might have been more had James O’Doherty and Kieran Issit not fought back from being five down after the first eight holes to lose by only two against Logan Mair and Tim Hedin whose short game was impressive. They halved in the afternoon.

It was a battle of the big hitters when Jack Forgan, back from Stirling University, and James Ollington met in the morning. Ollington and eight-handicap Jack Strowger came out on top which led to successful change of tactics by Stowmarket team captain Henry Cutting for the afternoon.

Stowmarket won by three in the afternoon. Had Jones sunk a short putt on the 17th to go four up the match could well have gone to a play-off.

Palmer and Edmond had held Matt Lockwood and Andy Forgan, noted for some spectacular bunker escapes, to a half in the morning.

The key to Aldeburgh’s victory rested on how their last pair, Jack Levermore and Jim Harrison, would fare against Owen Clouting and Ross Harvey who had saved Stowmarket from a home defeat at the hands of Diss in April.

Levermore, a youthful three-handicapper with great potential, and eight-handicap Harrison who has done a great job this year as Suffolk boys’under-16 team manager, went three down on the 15th green in the morning. The fact that no further damage was done over the final three holes was key to the overall victory.

In the afternoon the Aldeburgh pair ended one up. They arrived on the 18th tee with the match already won.

Neither reserve, Ben Forgan of Stowmarket nor Roger Taylor of Aldeburgh was called upon. Taylor replaced Mike Olding who withdrew with tennis elbow.

Members of both clubs were out in force. Aldeburgh past captains and officials, George Gadney, Perry Hunt, Peter Watson, and current secretary David Wybar (who played in the winning team 25 years ago) were all there with former lady captains as well.

Both club professionals, Keith Preston of Aldeburgh and Jon Markham of Stowmarket, were in support.

The Bury greens were excellent and the fairways had recovered from the heatwave although preferred lies were in use.

While waiting for the presentation there was talk of the need for neutral venues. Players seem keen but club officials in the past have been less enthusiastic. The matter will be discussed again next month. 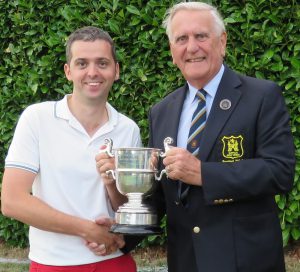 Afternoon: Mair and Hedin halved with O’Doherty and Issit, Stowger and Ollington 3 Lockwood and A Forgan 0, Palmer and Edmond 0 J Forgan and Jones 3, Harrison and Levermore 1 Clouting and Harvey 0. 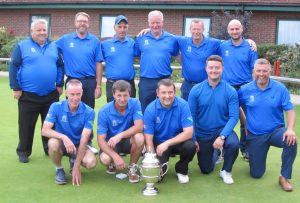 Haverhill won the Tolly Cobbold Cup for the first time since 2002 and only the second time in their history.

They established a nine-hole lead over Ipswich at Ufford Park in the morning. Tactical switches by Ipswich saw Haverhill’s lead reduced to three at one stage in the afternoon. Then Haverhill’s final pair, Paul Abbott and reserve Kim Ward, won five up against Nigel Hubert and Simon Wiggins who had been the only Ipswich winners in the morning.

Afternoon: Wilkins and Russell halved with Steve Byford and Thompson, Turner and Brennan 0 Nugent and Knight 2, McLennan and Mansfield 0 Brown and Martin 1, Abbott and Kim Ward 5 Hubert and Wiggins 0.