James O’Doherty crowned a great season of golf when he won the much coveted ELMSWELL GOLF CHAMPIONSHIP at Stowmarket Golf Club on Friday 21st September 2018. James had already won the Stowmarket Club Championship earlier in the summer but his 36 points in really challenging conditions on Friday may have even surpassed that performance. With five birdies the 2 handicapper had a brilliant round leaving his nearest competitors, three previous winners, Irene Overman, Dave Bicknell and Ian Hay, 4 points adrift with 32 points each. James also won the men’s longest drive on the 5th finishing on the fairway level with the poplar approximately 350 yards from the tee.

The Elmswell Championship has been an annual event for 18 years and this year the event was generously sponsored by THE ELMSWELL FOX.

The competition is only open to golfers living within the Elmswell boundaries or previous winners that have moved away. The event was organised superbly by “Little” Dave Overman with the best turnout for many years 31 players and 41 attending the presentation dinner.

In keeping with tradition, 2017 Champion, Stuart Harland, presented the trophy to the New Elmswell Champion Golfer for 2018, James O’Doherty. 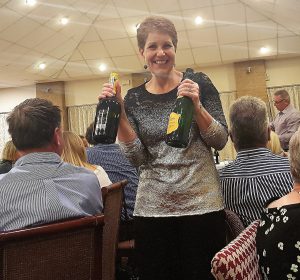 Past winner Irene Overman receives her prize as first lady.