An iconic piece of artwork has captured the imagination of visitors and shoppers alike.

“The Final Push” which has been created by gardening supervisor Duncan Riggall sits proudly in the Arc Shopping Centre, in Bury St Edmunds.

It’s one of the 18 pieces of work which comprise the World War 1 Trail in the town and has turned heads by those passing by. 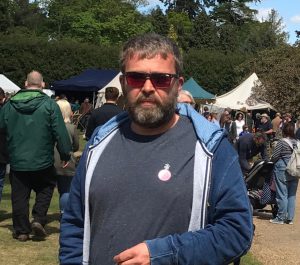 Duncan, pictured above, who used to live in Bury St Edmunds but now has his home in Sible Hedingham, near Halstead, drew his imagination for the work from the Rivers of Blood at the Tower of London, a location he passed by regularly while working in London.

It inspired him to create the piece which reflects the horrors of the war.

It is a side view of a trench as if you are standing in it and the materials he has used have predominately been recycled products.

The polystyrene was all packaging, the timber reclaimed and 500-plus poppies are all handmade from clay.

The 50-year-old described it as a poignant reminder of the dreadful times that soldiers spent in the rat-infected trenches with thousands of them having to withstand deep, water-filled places to fight the war.

The trail, which is being sponsored by Bury St Edmunds’ company Treatt, is being organised by the My WiSH Charity and Our Bury St Edmunds, the business improvement district (BID), and runs until Armistice Day, on November 11.

There will then be an auction for all of the pieces with funds going to the My WiSH Charity’s Every Heart Matters appeal which is aiming to raise £500,000 for a new cardiac unit at the West Suffolk Hospital.

Duncan, who used to work closely with Steve Manning, who runs Topiary Art Design, at Pakenham, and created the tank which is in the Abbey Gardens, said he was approached to carry out the work after taking part in the Wolf Trail.

“I’ve always been creative and I took my inspiration from the Rivers of Blood which I used to see when I was working in the capital as we used to drive past the Tower of London and was blown away by it and I thought about the trench and that’s how it came about.

“But the one thing I could not source for the work was the rats which I had to buy online and gave them a ‘haircut’. I spent a lot of hours on it and it was about 18 months in the planning.

“It’s been a long, long process, but it’s been so worth it.”

“The Final Push” is sponsored by the Arc and centre manager Colin Roberts, said: “It’s a lovely piece of art and the trail was something we really, really wanted to get involved with. Proceeds from the trail are going to a brilliant cause (the hospital) and it is now our charity of the year.

“It’s wonderful for the community to have the heart unit and the trench looks absolutely tremendous where it is situated as everyone coming into the centre will see it. It looks so realistic and we are delighted that lots and lots of people are going to notice it.”

If you want to support the Every Heart Matters appeal go to the website www.mywishcharity.co.uk and if you would like to donate to the appeal you can do so by going to: Justgiving.com/ehma or text EHMA17 £10 to 70070.

All pieces of artwork will be available to own and if you are interested in a specific piece, email sue.smith@wsh.nhs.uk

Call made for people to check their electoral registration