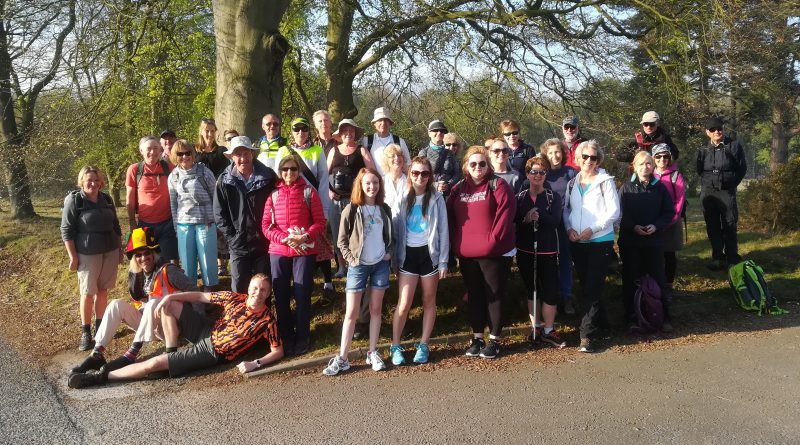 The people who took part in the Theatre Royal Bury St Edmunds 200 for 200 sponsored walk have been welcomed back and with the hope that up to £10,000 has been raised.

The core team of three walked more than 200 miles over the 10 days and a total of 95 walkers were together on the last day, walking the final 15 miles from Knettishall, or eight miles from Ixworth to Theatre Royal where they were all greeted with a celebratory party.

The walk kicked off on Saturday, April 13, and ended with a bang on Monday, April 22, after a 232-mile walk in total.

Tony, Maggie and Dawn, the core trio, followed the historic route of the Norwich Company of Comedians and were joined by many other volunteer walkers along the way, including 87-year-old patron of the theatre, Gordon Cawthorne, who managed to raise over £2,000 on his own, as well as joining the walkers for the last eight miles.

Speaking about why he decided to take part in the fundraiser Gordon said: “I suppose I have always been drawn to the theatre, having been a London child of theatre-going parents. Theatre Royal has evoked vivid memories of school plays at The Scala (Charlotte Street, not Milan!) and of course thrilling pantomimes. But I realise that the modern-day theatre must go on for all our sakes. It is an invaluable local resource and under its present direction it must be kept going for all in this lovely old town, and for that reason I am happy to do the walk, even at my advanced age.”

As well as celebrity support from the likes of Sir Ian McKellen, Sir Derek Jacobi, Sophie Raworth and Griff Rhys-Jones, joining the walkers on the last day was none other than Theatre Royal pantomime legend, Chris Clarkson, who may be better known as Nanny Fanny from “Sleeping Beauty” or Dame Winona Whittington from “Dick Whittington”.

He said: “When I first heard about all the events that the theatre team were planning for their 200th birthday I jumped at the chance of being involved. Honestly, it’s such a wonderful space to play, building to work in, theatre to look at and asset to the Bury St Edmunds community, I’d do anything for it.

“I’m lucky enough to have appeared on stage there in three pantomimes along with “The Love Gala” last year and also a community project, too, so I feel deeply embedded in the recent history of the place. Having said that, though, it’s nothing when you consider the 196 years the theatre was around before I rocked up, but hopefully events like this will help the theatre remain established and keep it creating such wonderful and thought-provoking entertainment for the local community for years to come.”

The sponsored walk was not just a chance for intrepid walkers to prove their endurance, but it was also another important fundraising opportunity for Theatre Royal Bury St Edmunds. Theatre Royal offers on average 185 different shows with 485 performances throughout the year. But its contribution to the community is far, far broader than the huge variety of shows happening on stage. It is a major cultural and social asset and a key part of Suffolk and Bury St Edmunds’ heritage and tourism industries reinvesting over £4 million into the economy. It also offers a wealth of programmes and opportunities for children and young people helping inspire them to achieve their potential. It works with literally hundreds of young people each year helping to enhance educational attainment and life chances, and embracing children from low income backgrounds to ensure everyone ‘has a piece of the cake’.

So far, the sponsored walk has raised around £9,000, but with donations still coming in the total is climbing ever higher, with the overall aim to hit (and exceed) that £10,000 mark. There’s still time to add your support, either to the walkers as a group or to any individual taking part, just visit www.justgiving.com/fundraising/200-4-200

Pictured above are the walkers before setting off from Knettishall.