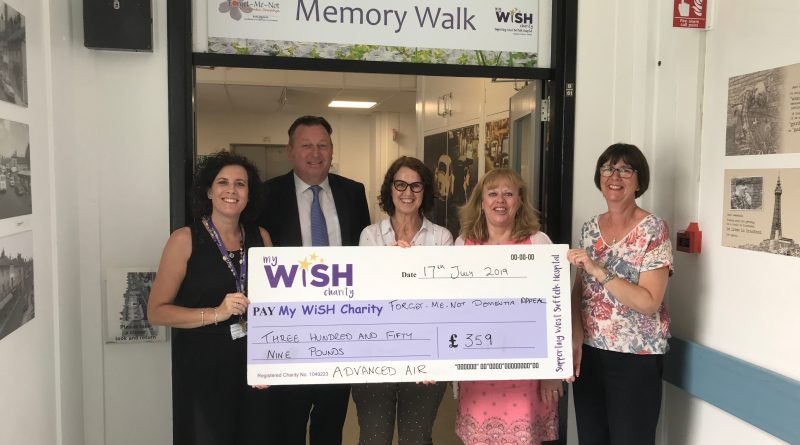 A cake sale and raffle has raised a total of £359 for a hospital appeal.

It’s come as a result of the event held at Advanced Air, which is based in Burrell Way, Thetford, with the money targeted at the My WiSH Charity’s Forget-Me-Not Dementia appeal.

And after handing over the money staff were given a guided tour by dementia trainer Maggie Woodhouse and appeal manager, Sally Daniels.

The sale and raffle, held at the firm’s premises led to an array of cakes made by up to 20 members of staff being sold off along with the raffle which featured a host of drinks and gift vouchers.

It managed to raise £259 with the firm, which produces energy efficient air distribution and fire safety products including fan coil units, air diffusers, and fire and smoke dampers, donating a further £100.

Maggie Fisk, the accounts office manager, said: “We were thinking of going to raise the money for a national charity but we wanted to do something more local as it’s something people can relate to. So we sent out a questionnaire to our staff asking them what they wanted us to support.”

They chose the My WiSH Charity, which supports the hospital, with the dementia appeal chosen to be the recipients of their efforts.

Maggie added: “All the staff came along and they also donated the raffle prizes as well. It was a great fun event.”

Sally Daniels said: “It was a pleasure to be able to invite Advanced Air in to see that, by supporting local, we can show them just where their money goes and the difference it makes. The company have been amazing supporters and entered our Soapbox Challenge last year and are back to try and take a trophy back to Thetford.”