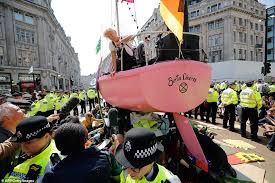 A pink boat along with a live Samba band are set to be at the heart of a rally in Bury St Edmunds by climate activists.

They are planning to meet tomorrow (Saturday, September 7) on the Cornhill in a bid to make a public declaration of rebellion against the Government.

Laura Fellows, Extinction Rebellion Bury St Edmunds activist, said: “The science is clear: a mass extinction event is under way on earth – an event that we have created and that now threatens our own lives.
“Our Government has failed to act to protect the planet so it’s up to us to force change. We call on everyone to join us in London from 7th October in a mass rebellion when we will peacefully shut down all roads into Westminster and non violently disrupt the Government until our leaders agree to take emergency action now.”
The activists will march from Angel Hill at 11.30am to gather at the boat on Cornhill.
At 12.15pm they will make a formal Declaration of Rebellion.
The pink boat symbolises the boat that stood in Oxford Circus during the demonstrations in April this year. Bury’s boat is named ‘Polly Higgins’ after the lawyer and climate lobbyist who died this year.
Share This Post: