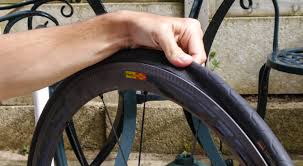 A complaint over a cyclist leaving a discarded inner tube in a garden has led to a flurry of abuse which have including some unwarranted expletives.

It’s raised the question of how the monitoring and use of a local social media site is carried out and the checking of messages and responses following a host of unrelated replies.

The issue began when Gordon Tonnar, from Hesset, posted a message on Next Door complaining about his £2,750 lawn tractor being severely damaged after he ran over the inner tube while cutting the grass.

He said: “To all of you lovely cyclists that ride through our village roads mob handed and sometimes three abreast assuming you’ve got the right of way; I really don’t mind you hogging our roads all dressed in your matching Lycra, what I do mind is you changing your inner tubes in front of my house then discarding your old inner tube on to my grass.

“I cut the grass and chopped an old tube. This did not only catch and damage one of the blades it also broke the belt on the drive/cut system. It’s a £2,750 lawn tractor. Put it in the bag you got the new one from and take it home. Please do not throw it on my grass.”

Janet Noonan, of Felsham, joined in the complaint saying: “They think they damn well own the roads, riding around God knows how many abreast at times on the lanes and refusing to bloody well move over so cars can pass safely does my head In.”

Hannah Carter, from Drinkstone, added: “They do my nut in at times, I’m sure they are not all the same but the ones I’ve come across are quite frankly arrogant to the point they ride so many abreast you are stuck behind them and when you do drive past them they put their hands up in disgust.

“They cycle past the house at stupid o’clock in the morning going hell for leather in their ‘Lycra makes me go faster active wear’ having a whole conversation so loud to each other that you almost feel part of it. I’m all for hobbies and getting out in the great outdoors but not inflicting it on others so they are restricted on the roads etc. Selfish springs to mind.”

And John Davenport, from Bradfield St George, said: “I agree with all that is said and one day somebody will get hit by a vehicle and all hell will break loose, but who’s fault will it be?

“I came round a bend doing 30mph to find three men abreast on their cycles. I had to swerve to miss them and in my rear view mirror I got finger jesters from them. I almost turned round to go and have a go but would have been out numbered. Somebody has to do something about this before it’s too late.”

However, the argument developed into a series of rants from pro and anti cyclists with Maglia Rosso, the cyclist centre in Hawstead, Denny Bros, the Traffic/Training Awareness Course for motorists who get caught speeding, the vehicle road tax, BMW 3 series drivers and geese droppings in Beyton, being drawn through the argument, with Peter Marsh, from Woolpit, saying: “The original post was about inconsiderate person (won’t say cyclist as not proved, but from the evidence most likely) throwing an inner tube into a garden and causing damage. From then it’s become a debate about cyclist’s in general. Pity really as most cyclists are professional and considerate.”