Today marks the 80th anniversary of nine RAF men being killed in a tragic mid-air collision.

The wreckage of one of the aircraft involved, Wellington I L4288, remains as a stark reminder of the 5,000 lives lost in RAF training accidents and the 55,573 lost in RAF Bomber Command during the Second World War, which had begun just over a month earlier.

Bob Collis, historian with the Lowestoft Aviation Society and manager of the group’s Facebook page (https://www.facebook.com/Lowestoft-Aviation-Society-1642787119290638/) told suffolkvillage.info that shortly before 10am on the morning of October 30, 1939, three Wellington I’s of 9 Squadron took off from RAF Honington on a formation practice sortie.

Planners at that time were still convinced a tight formation of bombers armed with power-operated turret guns could fight their way through German defences in daylight, and fighter evasion tactics were being developed.

Squadron Leader Lennox Lamb, a Flight Commander, had conceived a new defensive tactic called the “Skate” formation where the flight would echelon downwards and backwards behind the leader and the turret gunners theoretically would rake the attacking fighters as they broke up and away.

Cloud base was at 800ft so when the formation flew across the aerodrome and went into trail they were already at a dangerously low altitude for such an exercise.

Mr Collis said: “At 10.15am, just as the flight had completed the manoeuvre and were returning to ‘Vic’ formation, Wellington L4363 climbed into the underside of Wellington L4288, the latter having failed to gun up its engines in time. The two aircraft separated just before impact, both crashing less than 100 yards apart in marshy ground only half-a-mile from the runway end at Honington. The crash, in the vicinity of Sapiston Water Mill, was fatal for both crews; L4363 hit a large oak tree and burst into flames while L4288 plunged into a boggy dyke minus its tail. Pieces from L4288 were scattered through Sapiston and several villagers had narrow escapes from, falling debris. 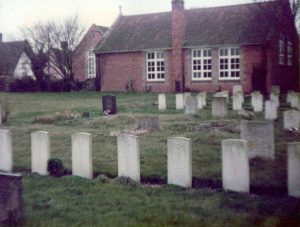 “Unable to access the crash sites with vehicles, the RAF had great difficulty recovering the bodies and the wreckage. Five of the victims were laid to rest in Honington (All Saints) Churchyard.” (Pictured above).

He added that during the early 1970s an RAF NCO named Peter Agate mounted a recovery operation at Sapiston and was successful in recovering a Pegasus XVIII engine. The whereabouts of that engine are still unknown. 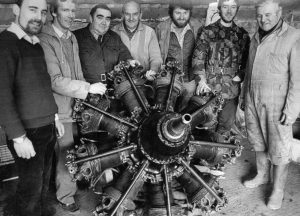 Members of the Norfolk and Suffolk Aviation Museum, including Mr Collis, (pictured above) visited the site in 1982 to carry out a survey and were astonished at what still remained. 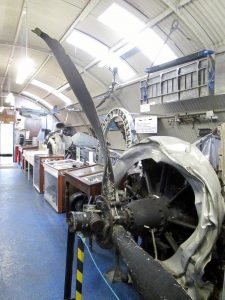 The following year a major recovery operation was mounted and all the remaining wreckage, which included a Pegasus XVIII engine and propeller, both engine nacelles, major parts of the wing spars, fuselage centre section and bomb release gear were transported to the aviation museum in Flixton, near Bungay, (where they can be seen pictured above).

Mr Collis said: “The biggest surprise came when we discovered the previous recovery effort had hacksawed off an engine nacelle and used it to fill in the hole left by the recovered engine. After cleaning, shot-blasting and painting, the wreckage was reassembled, initially outside. However, when work began on a new RAF Bomber Command building at the museum, priority was given to making L4288 the centrepiece.

“Sons of Lennox Lamb, pilot of L4288 on her last tragic flight, were among the guests of honour when the building was opened in 1997.

“Sadly, the notion of self-defending bomber formations was finally shattered for the RAF two months later over Heligoland in a disastrous operation which saw half the force shot down by enemy fighters and led to Bomber Command switching increasingly to night raids.”

All photo courtesy of Bob Collis.