Police have issued images of a group of males they would like to speak to following an attempted distraction burglary in Brandon.

The incident took place between 11.35am and 4.10pm on Wednesday, June 26, at a property in Saffron Close.

At approximately 2.40pm a male approached the door and asked the victim – a vulnerable woman aged her 70s – about whether she would like him to carry out some work to the trees but the male left.

Around an hour later, three males attended the address again and managed to gain access by either speaking to the victim at the door or by potentially damaging a garden gate.  One of the males then went upstairs to the property but nothing was taken.

The males then carried out some basic gardening work but they were disturbed when another person, who was known to the victim, turned up at the address. The males then ran off towards a nearby woodland at around 4pm.

Officers would like to trace the men pictured in the images, which were captured on a Ring Video Doorbell at the front door of the property and also on CCTV cameras, as they may be able to assist with their enquiries. 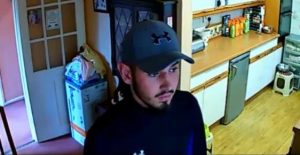 The first male suspect (pictured above) is described as white, approximately aged in his early 20s, of a slim build, 5ft 7ins, with dark hair, a dark beard and he spoke with a foreign, possibly an Eastern European, accent. He was wearing a navy blue zip up sports jacket with a logo on and a black cap with the same. He was also wearing mid tone jeans and a burgundy t-shirt with a slogan relating to gardening services or similar on. 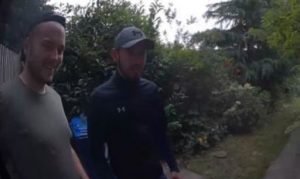 The second male suspect (pictured above, left) is described as white, aged his mid to late 20s, around 5ft 7ins, with a stocky build, fair hair and stubble. He was wearing a dark baseball cap turned backwards and wore a beige/sandy green t-shirt. 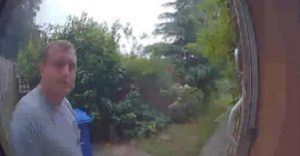 The third male suspect (pictured above, left) is described as white, around 25 to 30-years-old, 5ft 9ins, of a large build, with very short hair and a round face. He was a wearing a grey t-shirt.

Police are urging members of the public to always ask for identification from any unexpected callers and not to let anyone in if you are not comfortable with who they are.  Genuine callers won’t mind waiting whilst you make the appropriate checks to ensure they are legitimate.

Residents are also urged to keep an eye on their neighbours’ homes, particularly elderly neighbours who may be vulnerable to bogus callers or rogue traders.

Residents may also wish consider installing a Ring Video Doorbell device which can, via a motion sensor, capture footage of activity outside properties.

If you believe you have been a victim to a rogue cold caller, or if you have any information regarding the above incident, please contact West CID at Suffolk police by quoting crime reference 37/37115/19