Shiver me timbers: there’s something smashing with some super fun and frolics going on in Bury St Edmunds … oh yes there is!

It’s that time of the year when the panto comes to town and the Theatre Royal has it all in vast quantities.

Peter Pan is littered throughout with the familiar family fun-loving diet of what you come to expect from a traditional Christmas panto at the Theatre Royal and it gets everyone involved; cheering and booing the heroes and villians. 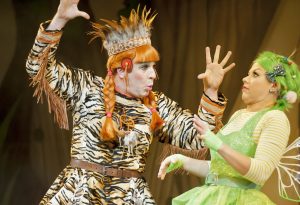 The cast are superb and non more so than regular panto dame Chris Clarkson, as Tiger Lily, and his sidekick Smee, played by Oliver Mawdsley. Their often off-line moments are a real treat, but you need to be alert to spot them. And their comic capers keep coming.

Watch out if you’re in the firing line of Wendy’s cleaning song and make sure you sing loud and proud to the “Witch Doctor” song. 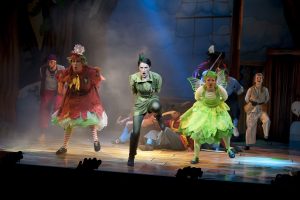 The story takes the familiar line of Wendy (played by Jasmine Hackett) being spirited away to Neverland by Peter Pan (played by Bury St Edmunds’ actress Lauren Chinery). It’s there they encounter the children from Neverland which includes Slightly (Samuel Howe-Barrett) and Tinkerbelle (Anna Campkin), Tiger Lily and Smee.

But they have to fight off the frightening pair of Captain Hook (Alan Mehdizadeh) and the marauding and menacing figure of Mad Maud (portrayed by Joanne Sandi) who is the star of the show as she prowls around on the look out for anyone who dares to challenge her master.

She is also wonderfully sea-saltingly alluring as Miranda the Mermaid as she helps Peter Pan, Wendy, Tiger Lily and Smee smuggle their way onto Hook’s ship. The quartet’s synchronized swimming routine would probably have judges scratching their heads on how many points to award but it’s great fun just to watch their routine. 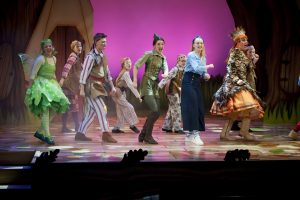 There lots of familiar songs dotted throughout the production which have been creatively composed by musical director Ward Baker who is supported in the pit by drummer Luke Pettit.

The team behind Peter Pan, regarded by CEO and artistic director Karen Simpson as the perfect panto for the theatre’s 200th anniversary as its author J M Barrie visited the venue, are to be congratulated. There are some special effects with the props and puppetry … and a rather large looking reptile.

A huge congratulations to everyone involved. It’s a marvelous production which has it all for the family to enjoy and you have plenty of time to catch up with it as it’s running until Sunday, January 19.