Businesses across Bury St Edmunds have helped to bring some Christmas cheer to young patients at the West Suffolk Hospital and at the same time brighten up the wards and corridors for the festive season.

For they have combined to donate a raft of decorations for the Rainbow Ward along with Christmas trees across the hospital.

Glasswells, in Newmarket Road, raised £1,140 from their annual staff quiz so the childrens’ unit could buy decorations and kit out the ward.

A total of 24 teams, including three from the hospital, took part in the event which was won by a team of doctors called The Rainbow Blood Pressure and second was a team of warehouse staff from Glasswells who named themselves The Best Little Warehouse in Texas.

Now in its 13th year, the annual quiz has raised thousands of pounds for many different local and national charities, with this year’s funds being donated to the My WiSH Charity, to provide festive decorations for the children’s Rainbow Ward.

“The annual quiz night has become an important and much anticipated event in Glasswells calendar,” explained Paul Glasswell, managing director. “We are over the moon to have raised such a significant sum of money, which will certainly help to brighten up the ward for the children and their families over the Christmas period. I cannot thank our staff enough for their continued enthusiasm and generosity.”

Amy Hatch, My WiSH Charity fundraising officer, said: “We are so grateful to Glasswells for raising such an incredible amount of money to support our wonderful Rainbow Ward. It really is very festive now, thanks to everyone’s support. Having spoken to some patients and their families I can, hand on heart, say that it really is making an impact to how our younger patients are feeling on the ward, and helping them to feel a little bit more at home while in our care.” 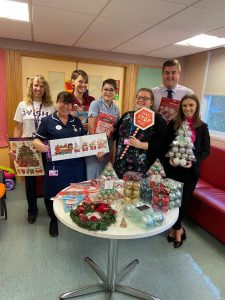 Meanwhile, Haart Estate agents in the town (pictured above) donated a bundle of decorations to the ward and Beth Moret, property marketing assistant at the office in the town, said: “A few of the team have recently had children so it was something that we were keen to get involved in and also we love Christmas so any chance to make the ward Christmassy.” 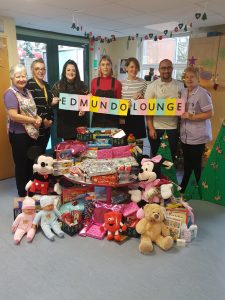 And the Edmundo Lounge, in the town centre, also gave a donation of gifts for the Rainbow Ward including cuddly toys, toiletries and many Yuletide presents. (Pictured above at the hospital).

Jessie Leach, the assistant manager, said: “This year our members of staff had the idea to do something for the childrens’ ward as some have experienced how great the ward is and how lovely the staff are and some of the patients and staff miss out on Christmas so we decided to try and put something back.”

They provided a collection table at the restaurant and bar for customers to make their donations.

“Lots of our customers have been so amazing and everyone has been getting involved,” she added.

Other gifts for the hospital came from Stephen John hairdressers who donated all the decorations for the Christmas tree at the front of the hospital. The tree was donated from Dobbies.

Pictured top are staff at Glasswells handing over the money from their annual quiz to Amy Hatch, My WiSH fundraising officer.

Workshop for people who question their identity, expression and sexuality

Councils chosen for pilot to ensure neighbourhoods have say on planning