Catrin Finch is a remarkable musician – one of the world’s leading harp players, her career has featured solo performances with the world’s top orchestras and collaborations with leading world music artists, including Toumani Diabate and Seckou Keita the kora player.

In 2000 she had the honour of reviving the ancient tradition of Royal Harpist to the Prince of Wales, a position she held until 2004, and which was last held during Queen Victoria’s reign. 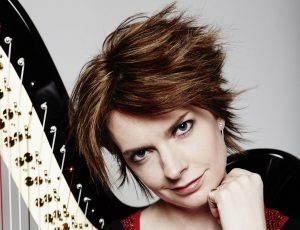 Back in 2007, showing her versatility in different musical genres, Catrin  (pictured above) embarked on an exhilarating tour of Wales with Colombian band Cimarrón, which they repeated in 2009 and 2010. Ten years later, Catrin and Cimarrón are touring the UK again, and there’s a rare chance to witness them at The Apex on Tuesday, February 4.

Grammy-nominated, Cimarrón play joropo – the music of the cattle-rearing descendants of Spaniards, African slaves and indigenous people from the plains of the Orinoco river. Their music preserves the spirit of freedom found in one of the world’s most untouched regions.

Sadly, Cimarrón director and harpist Carlos Cuco Rojas passed away on January 10, however the band have announced that they will continue the legacy of their maestro.

Their most recent album, “Orinoco” was nominated for Best Folk Album in the Latin Grammys and was awarded Top of the World Album in Songlines magazine.