That’s just a small taste of what to expect in the funny, heart-warming and inspiring production of Shirley Valentine which is being performed at the Theatre Royal Bury St Edmunds.

Willy Russell’s one-woman play is a true pleasure. And Keddy Sutton is a true wonder.

She ponders if she will be ever frightened of “life beyond the wall”; the wall which doesn’t answer back at her, the wall that listens without reply and the wall which is her constant companion in the life she’s compelled to live as a married woman.

But Shirley is determined to step out from her mundane life and experience the pleasures of her youth.

It’s May 1991 and she’s got the chance to escape and take a free two-week break to Greece with her best friend Jane which re-awakens the lost desires of her youth and she starts to see the world very differently. And after much meandering and rolling the dice of the who’s and why’s, she decides to take the plunge and take the holiday which reinvents her life. 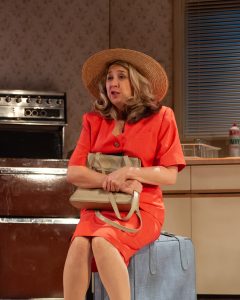 Her life and marriage is as exciting as the chips and egg she cooks for her ungrateful husband. She wonders what happened to the young Shirley who wanted to travel the world but married a man who gets jet lag just going to the Isle of Man – on a ferry.

So, suitably attired for the journey with all the vital necessities packed, 42-year-old Shirley jets off to Corfu and life changes dramatically for her.

Transported from her 90’s kitchen, which comes complete with a packet of Bold, Fairy Liquid, Pyrex dishes, fridge magnets, linoleum flooring and the time-honoured fridge freezer, cooker and washing machine, she arrives in the sun kissed island of dreams. The land beyond the wall to eat olives and octopus. 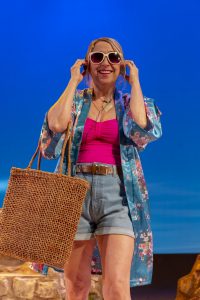 The set designs by Alana Ashley are brilliant as the beach scene is a complete contrast to Shirley’s kitchen. Flowers and pot plants, the bright sunshine, crystal blue sea along with the blue and white checked table cloth and white parasol seem like being on another planet compared to her life back in Liverpool.

So she sits and dreams at her table and chair by the sea.

Shirley Valentine runs at the theatre until Saturday, February 15, and is poignantly dedicated to Karen Simpson, the much loved and respected former CEO and artistic director of the theatre who sadly died last month. It was a play that was close to her heart and she was keen to see it performed at the Theatre Royal.

And as another twist Keddy, who like Karen is a strong Northern woman herself, was given her first acting role by Karen.