Bat and bird boxes, hedging and homes for hedgehogs have all been created on an electricity substation site thanks to a working party of power workers.

UK Power Networks has identified more than 100 substation sites across the east of England, south east and London for biodiversity enhancement that will attract more wildlife and improve habitat and conservation.

A group of volunteers spent a day working to improve the first of those sites in Debenham. They planted 60 meters of species rich native hedgerow, four traditional Suffolk apple trees and native ox-eye daisies, installed three bat boxes and three bird boxes made from recycled broken pallets, they also trimmed trees and used brash to create a dead hedge. 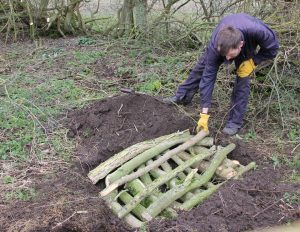 The team built four refugia (pictured) using logs, soil and grass cuttings from the site to provide homes for small mammals, like hedgehogs, reptiles, amphibians and insects. The refugia were created by digging a shallow pit, putting in layers of logs in alternate directions and then covering with soil and grass cuttings, ensuring gaps were left so animals could enter the structure.

Those that took part said they had learned some new skills, enjoyed giving back to nature and increased their knowledge of nature conservation.

Staff who took part in the work used the company’s Donate A Day scheme which gives the 6,000 employees two days paid leave each year to volunteer in their local communities.

Heather Patrick, UK Power Networks environment adviser, said: “We know that human activity is leading to massive declines in biodiversity through land-use change, overuse of natural resources, deforestation, pollution and climate change. This can feel like an overwhelming problem, but we can all take actions that will help to slow or reverse the loss, including supporting local conservation initiatives. As part of our Green Action Plan UK Power Networks has committed to enhancing biodiversity at substations.”

Ben McFarland, Suffolk Wildlife Trust’s head of conservation said: “It is fantastic that large organisations such as UK Power Networks are taking their wildlife responsibilities seriously. Our wildlife in Suffolk, as elsewhere, is under serious pressure and many species are declining. We all need to do our bit and so we were delighted to be able to advise and assist enhancing the substation land for a range of species. The site and others in the future, as they become wilder, will be really valuable for nesting birds, roosting bats and insects such as bumblebees.”

Pictured above are UK Power Networks volunteers in Debenham