He’s been making regular walks of between five and six miles most days during “lockdown” and now Joe Warren is planning a 14-mile trek from Great Cornard to Long Melford in a bid to raise money to support the work of doctors, nurses and medical staff at the West Suffolk Hospital.

The 31-year-old, who lives in Woodhall Road, Sudbury, is hoping to complete the route from Baker’s Mill, along the banks of the River Stour to Friar’s Meadow and Valley Walk, ending up in Long Melford, before returning back on the route: about the same distance from his home to Bury St Edmunds.

And the money raised will be going to the My WiSH Charity, which supports the work of the hospital, with it being directed towards the F12 isolation ward and F6, the Covid-19 ward.

Joe, who suffers from low bone density, said it will be a big challenge for him because of his complaint but said he was determined to complete the walk which is taking place tomorrow, Friday, July 31. 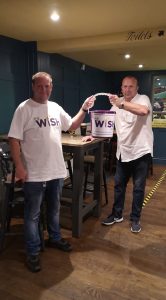 So far he has raised over £300 through his Just Giving fundraising web page and will be adding a further £200 to the total following a tour round Sudbury last weekend (pictured above).

Joe, who is an entertainment technician, said: “My aim is to raise as much money for F12 and F6 wards at West Suffolk Hospital to say thank you to the kind doctors and nurses who have helped so many people during this pandemic.

“During ‘lockdown’ I have been out walking to train for the walk ever since I got the idea to raise the money. Can I push myself to go that far is the question but I’m hoping to complete it.

“I wanted to do something that could help raise money for the hospital. I have several friends who work on the two wards and it’s to say a thank you to them for what they have been doing.

“I also wanted it to be local to Sudbury because it’s my home town and there have been people in the town who have had coronavirus and have had to be treated at the hospital.”

Joe said he is also hoping to carry out a litter pick on the walk to help the environment and anyone who wants to supports his efforts can add to his fund by going to his Just Giving web site at https://www.justgiving.com/fundraising/cornardsudburymelford

Sally Daniels, fundraising manager for My WiSH, thanked Joe for his determination and said: “Joe has been training hard, not only for this walk, but to raise money for F6 and F12. We can’t thank him enough and wish him all the very best for his challenge.”

Pictured top is Joe Warren out collecting and meeting people in Sudbury prior to his fundraising walk between Great Cornard to Long Melford.