Friends and neighbours came out of their homes to watch five-year-old Olivia-Rose Lawrence walk past them on her way to raising over £1,300.

The five-year-old was gaily dressed in a robot costume (pictured below) and walked two miles round the Howard Estate, in Bury St Edmunds, during lockdown. 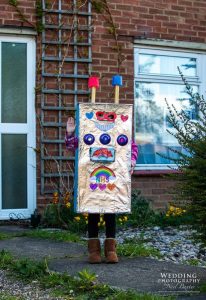 And the money she raised has gone to the My WiSH charity, which supports the work of the town’s West Suffolk Hospital, and has been directed towards the WiSH Upon A Star appeal and the critical care unit.

Olivia-Rose, who is a pupil at the Guildhall Feoffment Community Primary School, came up with the idea for the fundraising initiative and took inspiration from Capt Sir Tom Moore who raised millions for NHS charities for walking laps of his garden.

Her father Tony, who ran three marathons in five weeks last year raising £1,000 for the hospital charity, said that his daughter came up with the idea and wanted to do something to support the West Suffolk and collected a total of £1,362.05 from her efforts.

His runs were in memory of his father Malcolm who was treated at the hospital back in 2017 and was also significant for his daughter’s fundraising.

Tony said: “She effectively walked round the block two times,” he said. “And it was an impressive amount of money that she raised. She saw Capt Tom on the television and wanted to raise the money. She’s a kind-hearted girl and wanted to do something similar for My WiSH. She was pleased and very excited when she finished.”

The money came from family and friends plus a collection she made on the route round the estate as people came out to watch her.

Tony added: “There was a lot of people who came out and supported her and I am really proud of her and so happy that she wanted to do something.”

Amy Hatch, the My WiSH fundraising officer, said: “We are so proud of Olivia-Rose and this money will make a huge difference to enhancing patient care.”

Pictured above is Olivia-Rose Lawrence with her cheque for the My WiSH charity.