There’s a new parks manager at the Abbey Gardens.

For Martina Georgieva has taken on the role just a few days after coming to Bury St Edmunds.

The 36-year-old arrived in the town at the beginning of October and took up her new job just a few weeks later.

But she didn’t have to come all the way from her home country of Bulgaria as she was living in Norwich at the time.

She is delighted to be the head of the gardening team in the gardens and has big plans including an imaginative scheme around the River Lark.

Martina has a Level 3 Diploma in Horticulture and has been practicing the task for the past seven years. She also has a Bachelor Degree in Forestry and when she found herself “at home” in England she decided to add to her education with something she can practice everywhere. 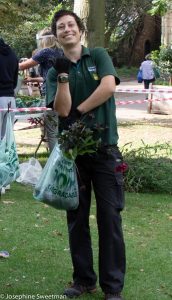 She managed to get herself work experience as a ground’s person, nursery plant assistant and an assistant trials manager in a seed retailing company after coming to this country 11 years ago when she was invited by a friend to Nottingham.

Martina eventually made her way to Great Yarmouth where she studied at a horticultural college and then moved to Norwich before travelling south to Bury St Edmunds.

And she said her role means she leads a team that has to look after a variety of sections of the Abbey Gardens … the Rose Garden, the Water Garden, the Sensory Garden, the Holocaust Garden and Pilgrim’s Garden as well as the newly-developed tennis court’s area and the main floral and centre piece of the magnificent and parkland. 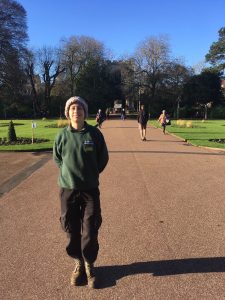 She said: “Ever since I came to UK I was fighting to start a new life and catch up with the rest of the world. This is why I always put in extra effort, make extra notes, work extra hours.”

Things have happened so quickly for Martina, who lives just a 10-minute walk away from the gardens.

She said: “Honestly – I don’t think I can quite comprehend it still. It has been, and still is, such a challenging year that I found salvation in hard work. I have been helping organise day-to-day duties in the Abbey Gardens.

“I love my job and the fact that I do must have been a contribution to me becoming a manager. But I think that if I stopped for a moment and allowed reality to catch up with me I would find myself overwhelmed. So I keep doing what I do best – gardening.

“I have a new team (eight in total, five full time, two part time and one seasonal) and only a few are experienced gardeners. So I have two main tasks for myself – ensure the team bonds, so people work together, and train the three apprentices to become good gardeners.

“So it should be like a walk in the park,” she added.

“It’s a great job and I work with fantastic individuals and you can see the fruits of your labour.

“I can honestly say that when I got off the plane to come to England I felt at home – it just fits me – and after that I decided to make a life for myself here.”