Over 100 vehicles were stopped, 60 Traffic Offence Reports issued and one man arrested, during a multi-agency day of action.

The operation took place yesterday, Wednesday, December 2, with the aim of disrupting and frustrating the activities of criminals, including organised crime groups, who commit offences across county borders whilst using the road network.

This was intelligence-led and involved vehicles identified as being potentially involved in criminality being brought back to a check site at the Tesco truck stop, near to the A12/A14 Copdock Mill Interchange, where police and partner agencies conducted checks of the vehicles and occupants.

Officers are also focused on all-round road safety and the fatal four offences of drink/drug driving, driving whilst using a mobile phone, speeding, and not wearing a seatbelt. 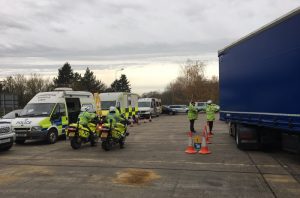 Anyone suspected of committing any of these offences was also stopped, along with people driving vehicles which were unroadworthy or had a defect.

Under the banner of Operation Alliance, Suffolk Police officers were assisted by Specialist Operations colleagues from across the Seven Force Collaboration Programme area, which includes Bedfordshire, Cambridgeshire, Essex, Hertfordshire, Kent and Norfolk. This was part of a four-day operation, with a different force hosting each day.

In all ;104 vehicles were stopped by officers in total, 71 of which were escorted back to the check site, with just 14 leaving the site clear of any offences. The other 33 vehicles were dealt with by officers offsite.

A 29-year-old man from Ipswich was arrested on suspicion of drug-driving and taken to Martlesham Police Investigation Centre. He has been released under investigation pending further enquiries.

A total of 60 Traffic Offence Reports were issued as follows: 10 for no insurance; eight for no MoT; seven for dangerous condition; seven for not wearing a seatbelt; five for careless driving; five for tinted windows; four for driving licence offences; three for insecure load; three for being incorrectly registered; two each for registration plate, being overweight and lighting; one each for using a mobile phone and illegal brakes.

Thirty-three people were breathalysed – all of which were negative – and four people were tested for drugs, one of which was positive.

The Suffolk Safety Camera Partnership deployed to roads in the surrounding area, including the A12 and A1214, the villages of Belstead, Copdock, and Pinewood, along with the Chantry and Stoke Park Drive areas of Ipswich, detecting a total of 46 speeding offences.

The DVSA issued three immediate prohibitions – taking those vehicles off the road straight away, four delayed prohibitions and four advisory notices. The DVLA clamped 10 vehicles for no tax, seized four vehicles, issued one warning and recovered £2,680 in fines. 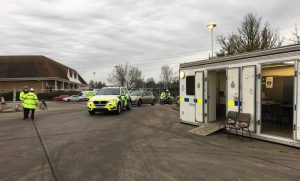 Inspector Gary Miller, of the Roads and Armed Policing Team, said: “This was another very pleasing day of action, with officers stopping over 100 vehicles and dozens of offences detected. Operation Alliance provides us with a fantastic opportunity to work with our colleagues from the Seven Forces Collaboration Programme and means that we can deploy even more officers to patrol the road network and identify as many offending vehicles as possible.

“Having all the partner agencies present enables us to investigate the full spectrum of potential offences, as everyone brings a different skill set or enforcement opportunity. The fact that 57 of the 71 vehicles brought back to the check site recorded an offence, displays the value of these operations. Too many people are still prepared to take unnecessary and often outright dangerous risks by using vehicles which are either unroadworthy or defective.

“It was pleasing that on the second day of the Christmas drink and drug driving campaign, all 33 breath tests carried-out were negative. However, one person was arrested on suspicion of drug-driving, whilst driving a vehicle towing a trailer which was not properly attached and carrying an insecure load – that is a frightening combination.

“We will continue to hold these operations on a regular basis, to target criminals who either reside in the county, or are travelling through, and also to remove unsafe vehicles and people driving illegally, making Suffolk a safer place to live for everyone.”