The Abbey of St Edmund Heritage Partnership has organised a series of free online talks for people to learn more about the Abbey which was founded 1,000 years ago.

And the next one is due to take place later this month.

Jordan Fantosme recorded how 12th Century mercenaries came to loot the town and said: “There is no better-provisioned place on earth than Bury St Edmunds,”

While the former Abbey of St Edmund may be in ruins, its influence, which has shaped the town that stands today, will be looked at in more detail this month.

It is 1,000 years since King Cnut founded the Abbey in honour of St Edmund.

Covid-19 has meant celebrations have had to be put on hold, but the second in a series of “From Rise to Ruins” free Facebook talks takes place later this month. It is designed to help understand more about the town’s past and its relevance to today. 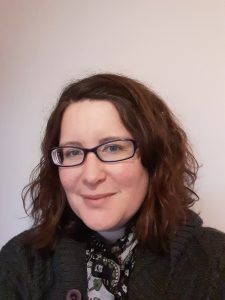 Dr Abby Antrobus, pictured above, will be exploring “The Relationship between the Abbey and the Town” in her talk at 2pm on Saturday, January 23, on the St Edmundsbury Cathedral Facebook page.

“Lots of people know already about the riots and the tearing down of the Abbey gates but perhaps not so much how the Abbey and the town were dependent on each other,” said Dr Antrobus, who recently moved from being one of Suffolk County Council’s Senior Archaeological Officers to Inspector of Ancient Monuments at Historic England.

“The shrine of St Edmund was the focal point with the town shaped and built geometrically in such a way as to align with the Abbey church.

“With pilgrims coming from around the world to visit the shrine came trade. It was a busy medieval town and we have historical documents that show the types of shops and stalls we had in medieval Bury St Edmunds – we even had Abbeygate Street, or Frenchmen’s Street as it was known then, sectioned into different areas defined by trade such as Spicers Row and Cooks Row.

“The Benedictine Monks of the Abbey were responsible not only for the medieval grid street layout seen throughout the town centre, but also for the provisions market that started in the town and which still takes place today.

“And there would be particularly busy times of the year such as around St Edmund’s Day. That meant more visitors and it was a good time of the year for traders. They even had to get extra people manning the gates.

“There were however also conflicts between the abbey and town, over rents, who controlled shops and stalls, to wider issues about the freedom of the townspeople to govern their own affairs although Bury St Edmunds wasn’t the only monastic town where this was an issue.”

Such was the importance of the town that it also required its own defences. As well as having five gates into the town – North, East, South, West and Risby – the town also had a ditch, at least four metres deep, running along St Andrews Street.

In 1173 when the Battle of Fornham took place and mercenaries came to loot the town, there are reports of townsfolk lining the ditch ready to defend their homes and the Abbey that stood at its centre.

You can hear more from Dr Antrobus at www.facebook.com/stedscathedral

If you are not on Facebook you can watch the video afterwards on the Cathedral website at https://stedscathedral.org/events/from-rise-to-ruins 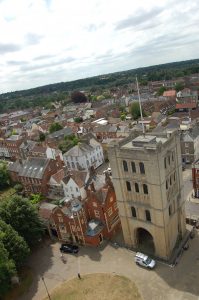 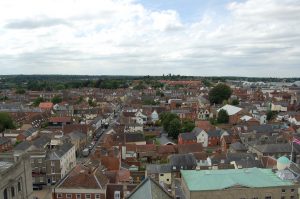 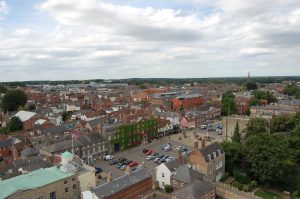 Further talks in the “From Rise to Ruins” series, will take place this year:

March 27 – Professor Mark Bailey will talk about “The Abbey of Bury St Edmunds and the History of Suffolk.’

All take place at 2pm at www.facebook.com/stedscathedral

The talks are being promoted by the Abbey of St Edmund Heritage Partnership and the Suffolk Institute of Archaeology and History.

The talks are free to watch and are supported by the National Lottery Heritage Fund and various local business sponsors. For more information visit www.westsuffolk.gov.uk/Visitors/Heritage/abbeyofstedmund.cfm