The Aurora Orchestra is due to play at the Apex next month along with Scottish-Italian violinist, Nicola Benedetti.

The orchestra will be performing Richard Ayres’ new work, No 52 (Three Pieces about Ludwig van Beethoven), which was premièred by Aurora behind closed doors at last year’s BBC Proms.

Conductor Nicholas Collon told The Guardian: “Digital opportunities are interesting, but I believe wholeheartedly that live performance is the reason we all fell in love with music and is ultimately irreplaceable… we will find a way through this crisis, I’m sure”

Described by The Times as “unbearably poignant, yet also indefatigably stoic”, No 52 (Three Pieces about Ludwig van Beethoven) is inspired by Ayres’ own personal experience of deafness.

Having suffered from hearing loss for the last 20 years, Ayres’ work is an attempt to convey how the soundscapes he imagines in music have been gradually lost to him, as clarity gradually gives way to confusion. 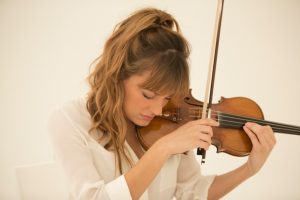 Beethoven’s own voice is heard in his monumental Violin Concerto in D, one of the most famous and loved masterpieces of the violin repertoire, with Nicola Benedetti (pictured above).

She won the BBC Young Musician of the Year award at the tender age of 16 and has since won a GRAMMY Award for Best Classical Instrumental Solo in 2020, and Best Female Artist at the 2012 and 2013 Classical BRIT Awards.

Having received an MBE in 2013, in recognition of her international music career and work with musical charities, Nicola was appointed a CBE in the 2019 New Year Honours list.