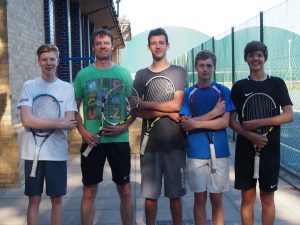 Well done to everyone, and also huge thanks to the team captains: Gary King, Ashley Dobson and Gregor Miller.

Risbygate entered the Suffolk Shield for the first time in several years.  The pairs of Gary Keens & Asa Sumner-Keens plus Adam Levey & Roan Turner won through their first two rounds in some pretty tight matches, reaching the semi-finals.  They then lost out to the stronger teams of Roundwood and Ipswich in the semis.  This was a particularly good result given that Gary was playing with a painful elbow and Roan had to fill in at the last minute.

Risbygate beat Cambourne in the semi-final of the Gray’s Cup, the Norfolk & Suffolk knock out men’s doubles competition, on Friday 8th September.  Captain Gary Keens put the win down to a fantastic performance from the young pairing of Asa and Adam.  They won their first 3 sets, coming back from 3-5 down against Cambourne’s first pair.  Nils and Gary halved both of their matches, giving a final result of 5-2.  They are through to the final against Royston.  This will be played on the indoor courts at Hills Road on Saturday 7th October at 6 pm.

The finals of the Club tournaments will played on Sunday 17 September from 10 am.  The expected schedule is:  Men’s and Ladies’ Singles at 10:00 am, Men’s and Ladies’ Doubles at about 11:30 am, and the Mixed final at about 1 pm.  Please do come along and see the best in the Club battle it out. 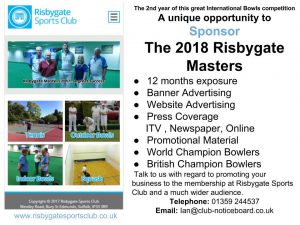