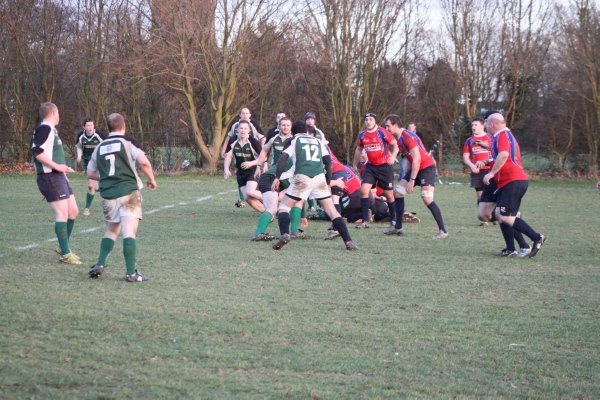 After inflicting a crucial basement battle 15-7 victory over Ipswich YM on Saturday Thurston Rangers face the same team again this weekend in the final of the Chadacre Cup.

The 2003 side forever etched their names into the club’s history in what was their first and, to date, only success in the county competition.

But current first XV captain Ed Ballam is hoping they can rise to the challenge and emulate their predecessors’ revered achievement at Ipswich.

The final will provide a welcome distraction from the relegation battle in London 3 Eastern Counties after last week’s victory which put them six points ahead of their rivals.

Tries came from Ballam, Jack Weaver Smith and a penalty and conversion from Tom Cadge.

“It is a welcome break,” admitted Ballam.

“I’m not sure how many will go down so we have to finish as high as we can to avoid it.

“But the feeling is amazing at the moment.

“There’s a good buzz around the area from both players and supporters ahead of the game.

“We are going in with the same team all uninjured so looking good.”

Club secretary Steve Dewar said a coach has been organised to take supporters to the final and he was hoping between 50 and 75 fans will turn up to cheer on Thurston.

He said: “The second team have re-arranged their game against Colchester to Friday night so they are free to come along and supports the first XV and there will be others who will travel independently.”

“I think picking up the trophy will be really good for us with how difficult this season has been for us as a team with the league being as hard as it is.

“I’m optimistic but we can’t guarantee a win as playing Ipswich YM is always a difficult game for us and will go down to the wire.”