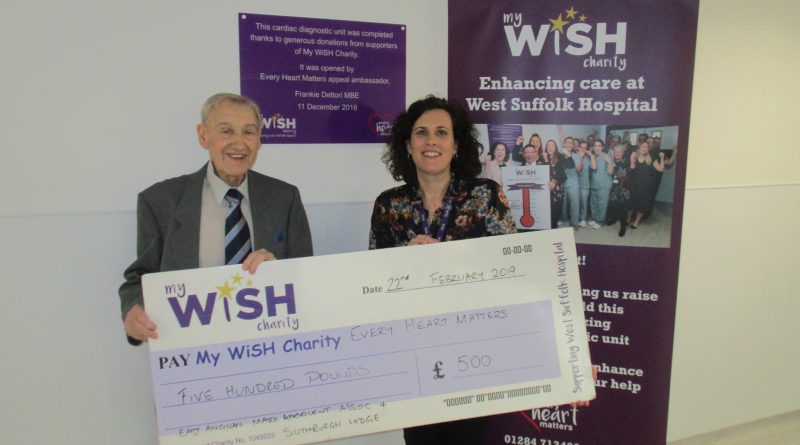 Freemasons from the Sudbury-based Suthburgh Mark Lodge have handed over a cheque for £500 to the My WiSH Charity.

The money was raised following a collection at the group which meets at the Masonic Hall in the town.

And lodge member John Ford, a former footballer with Bury St Edmunds, Sudbury and Long Melford and who has been treated at the West Suffolk Hospital for heart issues, along with bone and prostate cancer, handed over the money.

The group raised a total of £250 and it was matched by the East Anglian Mark Benevolent Fund.

The fund has helped to fund a raft of initiatives across the region and raised tens of thousands of pounds. Some of the fundraising has provided mobile chemotherapy units, over 100 St John Ambulance vehicles and more recently money to a charity which helps men and women who are suffering from cancer and the aftermath of diagnosis and treatment.

The Trustees of the fund prefer to give money to fund specific projects, in whole or in part, rather than running costs and it is likely that the Matching Grant Scheme will be continued in 2020.

Melvyn Eky, the secretary of the Suthburgh Lodge, which meets five times a year and has 35 members, said they decided to raise money for My WiSH following Mr Ford’s treatment.

“John had treatment at the West Suffolk Hospital for various things and he said staff there had been great so we thought it would be good to raise money for the charity.

“We are always looking for local charities which we can donate money to.”

Sally Daniels, appeal manager, said: “The new cardiac centre is now open and making a massive difference to the community with pacemakers being fitted and angiograms being performed. We couldn’t have completed the project without fabulous support of people like John and the lodge and we are truly grateful.”

Pictured above is John Frost, from the Suthburgh Mark Lodge Freemasons, with Sally Daniels, appeals manager for the My WiSH Charity.