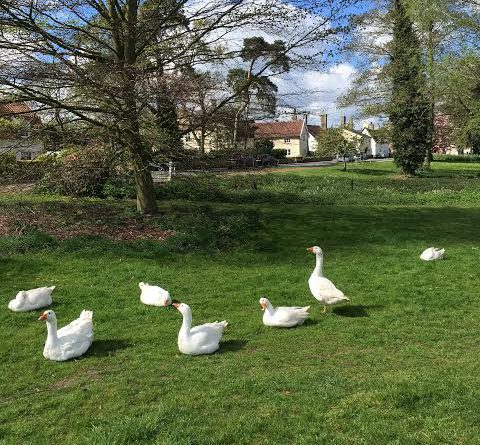 Geese droppings on The Green, in Beyton, has led to complaints by residents who say their young relatives have been unable to use the play area because of the mess calling it a “health risk”.

The comments have been made on the Next Door website but some people have come out in defence of the birds which are a feature of the village.

It’s come at a time when one of the flock has been lost after being struck by a car.

Karen Millar said: “I’ve had my grandchildren staying with me this week. It’s a shame they can’t play on the green because of the amount of goose droppings. Something needs to be done about this. We thought it lovely that the boys could go down on their own. But it’s not to be. It’s a health risk. I like seeing the geese in the village but they shouldn’t be allowed on the children’s play area.”

Tina Scott added: “Surely they can put a small frence round the play area to prevent the geese going there? I have the same problem when my grandchildren visit and I mentioned it last year but it’s still the same, an awful shame.”

And Elaine Robinson, who lives in Bradfield St George, said: “Sad thing is most other children’s play areas have a fence around to keep dogs and geese out and children in and safe. There is a solution but it’s not been actioned for reasons that I do not know. It’s just such a shame that a facility has been provided for local community children to use and a simple solution to make this small area a pleasure to use appears not possible.”

But Karen Simpson, who is part of the voluntary group that clear the goose droppings on a weekly basis, said: “We try our upmost to keep on top of this. Feel free to come and join us, get in touch with Graham Jones the parish councillor. It’s really not that bad scooping it up.”

And Karen Moroney, from Thurston, said: “Please leave the geese alone, they have been there for years, my son played on Beyton Green 25 years ago and he’s alive with no problems and he was always covered in goose poo, just go equipped with wet wipes and tissues.”

Pamela Green, from Norton, said: “The geese have been part of Beyton for years, I think they are beautiful. Yes, they make a mess which volunteers clear up, I bet dog walkers leave more mess.”

Suzanne Tonnar, from Hessett, added: “We take our boys and play football with them on the green at Beyton and common sense prevails wherein once we are home they wash their hands, not once have they come down with goose diseases and I’m pretty sure they never will do, if you don’t want your grandchildren to play on the park at Beyton take them elsewhere to play, example the woods at Bradfield or even take them over to Katie and Mikes Heath Farm on a Wednesday or Saturday where they can see many animals including geese.”

And Mike Lloyd, from Pakenham, said: “Why does anyone who has a problem with animal crap live in the countryside, it’s full of it? Presumably you notice it on the fields, chicken, pig and human.”

James Howard, from Elmswell, said: “The geese were there before people, find somewhere else for the kids to play or buy them some wellies.”