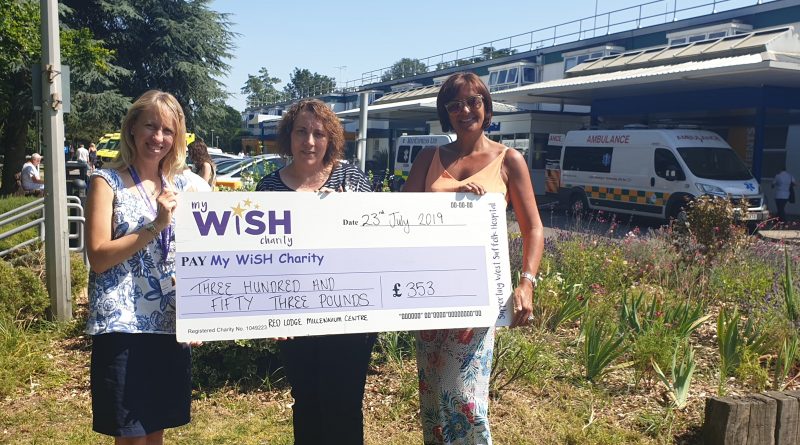 An over 50s tea party held at the Red Lodge Millennium Centre has raised £353 for the My WiSH Charity.

The event, which was held at the complex in Lavender Close, was in aid of the Big Tea which marked the 71st birthday of the NHS, and attracted up to 55 people who had an assortment of cakes, tea and coffee.

A raffle helped to boost the fund raising and Clicks Bar and Grill donated all the food.

The event was organised by Sarah Bell, the manager of the centre, and Sarah Prideaux, the senior administrator and event co-ordinator, said it was a great day.

She said: “We normally have an over 65s lunch two to three times a year to help the local community come out and meet each other and we decided to do the tea party to raise money for charity. Sarah picked out My WiSH and we charged everyone £3 each and it all went into the charity pot. It was a traditional event with lots of cake, tea and coffee and it was nice to see people having a good time.”

Those attending were also given advice from the Rural Coffee Caravan about how to spend their income wisely. They deliver information and friendship across Suffolk and bring the project to rural communities along with all sorts of information about organisations and the services they offer.

The centre offers a host of events for the community including conferences, parties, weddings, events and clubs and was officially opened on December 1, 1999, and has been serving the local community ever since.  It also hosts a café and bar, a pre-school, dance school and a number of local groups and fitness classes.

Amy Hatch, the fundraising officer for My WiSH, which supports the West Suffolk Hospital, in Bury St Edmunds, said: “It was lovely to see a local community getting together to celebrate our wonderful NHS and raising money for their local hospital.”

Pictured above is Michelle Wood, My WiSH legacy officer, Nikki Ashwell and Sarah Bell, from the Red Lodge Millennium Centre, at the West Suffolk Hospital, with their cheque for £353 which was raised from an over 50s tea party.