Armed Forces Day takes place annually each June and Babergh has been given the honour of hosting this year’s celebrations – scaled back to ensure public safety in response to the delayed easing of Covid restrictions.

He was joined by senior military officers, Suffolk County Council’s Armed Forces Champion, Mick Fraser, and the Mayor of Hadleigh, Frank Minns, for the ceremony which took place at Wattisham.

At present around 2,000 troops from the Army Air Corps and RAF are based at the airfield, forming a large part of the county’s military community. 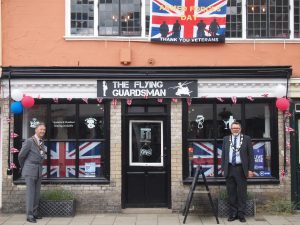 Babergh residents are urged to recognise this immense sacrifice on Armed Forces Day itself, Saturday, June 26, and the days leading up to this.

“I am humbled to have raised the flag on behalf of Suffolk at one of our county’s key military bases – enabling me to see first hand why Armed Forces Day is so important.

“Service life isn’t easy, with serving personnel having to uproot their families, miss loved ones while on tour and put their lives on the line during combat. We now owe it to them to recognise this selflessness by saluting our forces and thanking them for their incredible bravery.”

“The support of the people of Suffolk to the Armed Forces community based in the county, be they regular, reserve, cadet or veteran is fantastic.

“It is disappointing that the current Covid circumstances mean we are not able to parade in Hadleigh on Thursday as planned, but I would encourage all to take a moment on Armed Forces Day to show your appreciation by raising a salute and sharing a video or photo of this on Social Media using the hashtag #SaluteOurForces.” 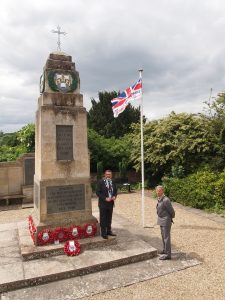 Mayor of Hadleigh Frank Minns (left) and Babergh District Council’s chairman Adrian Osborne (right) at Hadleigh’s War Memorial, where the Armed Forces Day flag will be flying throughout the week.

Commenting on the displays, he said: “It is wonderful to see so many fantastic window displays on and around Hadleigh High Street in recognition of Armed Forces Day and I would like to thank everyone who has participated in the trail so far.

“Although it’s very disappointing not to host our community thank you event on Thursday as we’d hoped to, this will not stop us from remembering those who have given up years of their lives to protect our country and its people. Please join me in honouring their unwavering commitment in a Covid secure way.”

Further ideas on how to mark the day and support service personnel can be found on the council’s website, which also includes stories from some of the county’s finest military heroes. These range from the Lord Lieutenant’s Army Cadet for Suffolk, to a busy mum of three who has been highly commended for her important role in the RAF.