Supporters of the Theatre Royal Bury St Edmunds golf day came back with a bang after two years of pandemic had force the event to be postponed three times. As one of the most popular events in the eastern region the event raises thousands of pounds for the Theatre Royal which is a registered Charity.

More than 200 people, players and supporters, turned out at Thetford Golf Club on Thursday 7th April 2022. A new venue for the event Thetford Golf Club was a star both on the course and in the clubhouse with exceptional hospitality from the hard working staff. The beautiful tree lined course was in excellent condition with slick greens that challenged the very best. 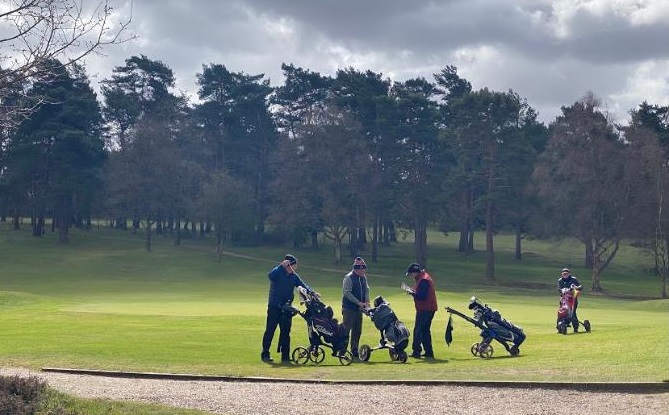 The weather was testing moving from sunny to showery to hail and back to sunny, all the time supported by strong winds. It was a day that provided some remarkable scores. The first group went out at 7.30am and the last team went out at 14.51pm.

Teams came from every corner of the region and farther afield with celebrities from the Stage Golf Society in Richmond and the Theatre’s own Panto Dame Chris Clarkson regular attendees. Sion Tudor Owen was actually due on stage at the Wolsey Theatre in Ipswich that evening in a “Frisky Farce” called The Bird & The Bees which is also due to be staged at the Theatre Royal in early May.

Mad Dogs, Life on Mars and Ashes to Ashes star Philip Glenister made his debut whilst Jonathan Whaley and the vicar out of Keeping Up Appearances, Jeremy Gittins have been regulars from the very start of the event back in 2011.

The golf was preceded by Coffee and Bacon Roll on arrival and then following 18 holes of golf a sumptuous Fish and Chips lunch/supper was served up.

The prize table was a great mixture of Tickets for the Theatre, sparkly, wine and golf equipment, with beer supplied by Greene King. We would also like to thank people who donated prizes for the raffle

The atmosphere in the club house was electric and the feedback on the day and the new venue was excellent. So good that we have provisionally booked Thetford again on Thursday 20th April 2023 details and entry forms will be available later in the year. 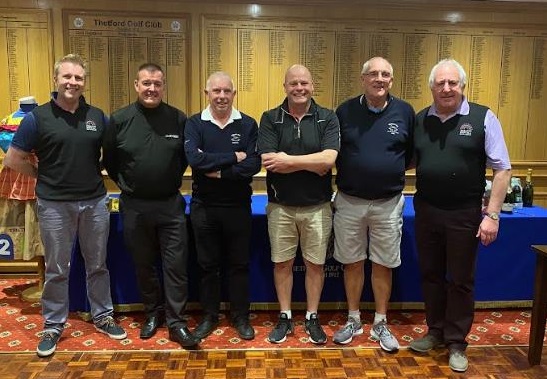