People from across the West Suffolk area have been recognised today (Thursday, June 2) in the Queen’s Birthday Honours List.

Mr Church, who is now 75, has been awarded a British Empire Medal after spending 57 years working at the Bury St Edmunds Abbeygate Cinema.

He has had to work very hard on occasions to keep the cinema open as it came under threat – and has worked to find new owners and ensure it has a future.

For many years he was general manager and helped on recent developments which look to have assured the future of the Hatter Street cinema building.

He also worked hard to welcome people with disabilities, families with young children and other groups to the cinema.

Although he has retired as general manager, he still does some work there as front of house manager and is well known as the face of the cinema.

And five years ago he wrote his autobiography detailing the struggles he had faced in keeping the cinema open during decades of change for the entertainment industry.

Daniel Hardiman-McCartney has been made a Member of the Order of the British Empire (MBE) for services to optometry.

The 42-year-old, of Rous Road in Newmarket, wrote Covid guidance for opticians and optometrists across the UK and met with representatives of the pharmacy, dentistry, GP sectors and governments to help ensure that eye care continued with minimal disruption during the past two years.

He has been working as an optometrist, both for the College of Optometrists and as a freelance optometrist since 2005.

Optometrists differ from opticians in that they focus on clinical, medical aspects of eye health alongside testing.

Another recipient of the MBE is Faith Rutterford having served at RAF Mildenhall since 1959.

The 80-year-old, who has no plans to retire, has lived in Barton Mills all her life and initially worked for 18 months as secretary to Bury Free Press editor Mr Appel.

Faith joined the base on April 27, 1958 initially as a clerical assistant in the Air Installations Office and her service spans the entire period through which the base was under the sole control of the US Air Forces in Europe.

Her synchronisation of the command team has contributed to the unit winning numerous accolades including two US Air Force-level outstanding achievement awards.

In 2019, to mark 60 years of employment, she received an American Meritorious Civilian Service Award, which is a rare accolade for a non-American to achieve and usually reserved for those holding the equivalent of a field-grade officer. 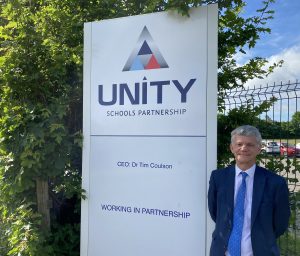 Dr Coulson (pictured above) has been awarded the CBE.

He has taught in five schools, including as headteacher at William Tyndale Primary School, in Islington, and worked in three local authorities – Reading, Camden and as Director of Education for Essex County Council – before becoming the first Regional Schools Commissioner for the East of England and North East London.

Since 2017, he has been chief executive of Unity Schools Partnership, an academy trust of 30 primary, middle, secondary and special schools.

He has also carried out the voluntary role of Independent Chair of the Norwich Opportunity Area Partnership Board.

Tim said: “This award is for all the amazing people with whom I have had the good fortune to work with and alongside. So many of them have brought passion and determination to improve education and life chances for children and I am privileged to have seen the difference they have made.”

Dr May, who comes from Nayland and is the Chief Nursing Officer for England, NHS England and NHS Improvement, has been awarded the Order of the British Empire for services to nursing, midwifery, and the NHS.