Hadleigh has been putting on a show to celebrate Armed Forces Day.

The national initiative is an annual recognition of the contribution of serving men and women, giving thanks to the sacrifices military personnel and their families make.

Businesses have used their windows to show support with creative displays, the Armed Forces Day flag has been flying at the war memorial and the High Street featured a mural saluting the forces, with thanks to the Royal British Legion. 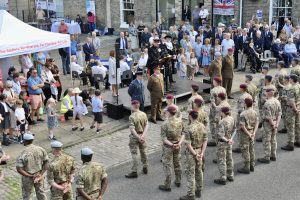 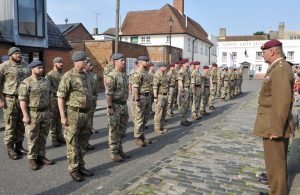 The highlight of the week was a free community thanksgiving event on Thursday, June 23, in Hadleigh Marketplace, at which Deputy Lieutenant, Gareth Wilson, received a salute from 75 service personnel representing every military detachment in Suffolk, plus reserves and cadets. He gave thanks for the work and dedication of the services, alongside Chairman of Babergh District Council, Cllr Kathryn Grandon and the Mayor of Hadleigh, Gordon McLeod.

Local residents came out in force to share in the celebrations and to give thanks to the Armed Forces.

After the public event, service personnel were treated to a reception in the Town Hall, hosted by Hadleigh Town Council

Councillor Grandon said: “It is a wonderful thing to see the strong support and connection between the people of our district and the forces community, particularly with Wattisham Flying Station staff. It’s an honour for Babergh to host this event on behalf of Suffolk.”

And Hadleigh’s Mr McLeod said: “Many people in Hadleigh have a direct link to the Armed Forces community, through work, family, or friends, so it’s no surprise to see the warmth of support on display.  The role of the Armed Forces in combat and in crises like the pandemic or supporting refugees from Ukraine can rarely have been so central in people’s thoughts.”

Together with neighbouring Mid Suffolk District Council, Babergh District Council is celebrating the 10th year of their commitment to the Suffolk Armed Forces Community Covenant – a pledge by local authorities on behalf of their respective communities and statutory agencies to support our local armed forces community.