A quirky comedy musical is coming to The Apex at the start of next month.

Called “Crooners” it is billed as a “rip-roaring” show with an injection of Big Band Swing and has been wowing audiences throughout the UK.

Fronted by three of the finest singers of today and backed by The Mini Big Band, the show is full of hilarious one-liners, laugh out loud silliness and superb musical numbers from some of the greatest crooners of all time including Frank Sinatra, Dean Martin, Sammy Davis Jr, Matt Monro and Nat King Cole.

“I’m a song and dance man,” states creator Roman Marek. “And was brought up on the music of the crooners, but also on the quintessentially English stage humour of Morecambe and Wise, Bruce Forsyth, and Max Bygraves.”

Roman has been a Frank Sinatra tribute performer on a Rat Pack show for many years and has learnt his craft of crooning well – but felt there was more to offer UK audiences.

“The super cool Sinatra stuff is great. Audiences love the songs and the acts. But I started throwing in the less cool British comedy stuff; tripping up the stairs, telling a joke wrong, and the audience would howl with laughter … this was the way I wanted to perform,” he said. 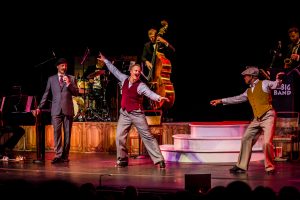 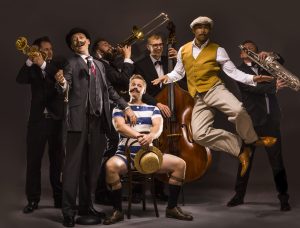 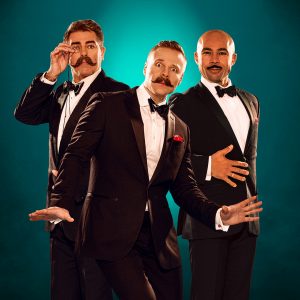 Fellow crooner Jim Whitley is a former football midfielder for Manchester City and Northern Ireland. When injury cut short his career, he took the opportunity to rekindle his previous experience as a singer.

Jim’s nimble feet have fared him well in his transition from football to theatre and he puts them to good use in an extended Fred Astaire inspired tap dance routine.

Jim said: “I’ve always admired the flair and showmanship of Fred Astaire and Gene Kelly, so I bought some tap shoes. I learnt the moves off YouTube. Now, it’s the highlight of my night. It’s music from a time where men had style and charisma and could sing, dance and joke like the best of them.”

And Mini Big Band leader Jon Hibbard added: “We wanted a show what makes British audiences laugh out loud. An all-singing, all-dancing musical comedy the likes of Morcombe and Wise. It’s original, has a swinging big band, and brings variety back to the theatre.”

Enjoy songs, such as “Lady is a Tramp”, “Come Fly With Me”, “L.O.V.E”, “When You’re Smiling”, “Fly Me To The Moon” and “Mack The Knife”, in a two-hour spectacular that will have you singing and smiling from ear to ear.