Five goshawks have been found dead (pictured above) after they were shot in King’s Forest, near Wordwell, prompting a £5,000 reward to help track down the culprits.

The birds were discovered on Monday, January 16, where they were left in a parking area just off the B1106 near the forest. 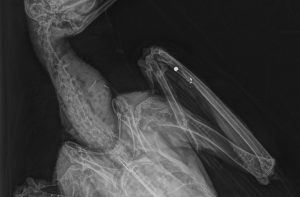 X-rays were carried out which showed all five birds had suffered injuries from multiple pieces of shot (pictured above).

All birds of prey are protected by law and to kill or injure one could result in jail and/or an unlimited fine.

Sergeant Brian Calver of Suffolk Constabulary’s Rural Crime team said: “This is a serious wildlife crime against an amazing schedule one bird of prey that was once driven to extinction in Britain. There is no place for such activity in modern times. Whoever is responsible for this needs to be brought to justice and I’d urge anybody with any information whatsoever to let us know.”

The RSPB is working with Suffolk Constabulary to help identify the culprit and has offered a reward of £5,000 to anyone who comes forward with information which leads to a conviction.

Mark Thomas, the RSPB’s head of Investigations UK, said: “Anyone who values the natural world and abhors those who actively and criminally look to destroy it will feel as outraged as we do about this utterly despicable incident. We are calling on anyone who has information to come forward to the police.”

The RSPB and other specialists are assisting officers with the investigation.

Anyone with any information is asked to contact Suffolk police quoting crime reference 37/3027/23, via the website http://www.suffolk.police.uk/contact-us/existing-report-update email: rwp@suffolk.police.uk call 101 or Crimestoppers on 0800 555 111 or via their online form: www.crimestoppers-uk.org