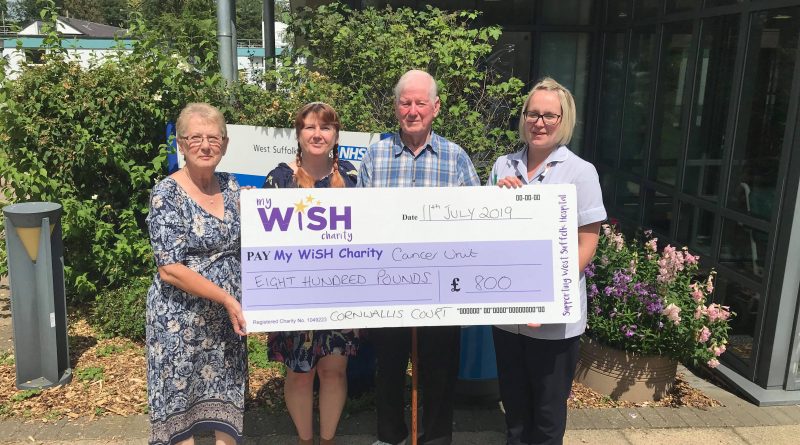 A Mad Hatters Tea Party has helped to raise funds for the cancer unit at the West Suffolk Hospital.

The event was held at Cornwallis Court, in Hospital Road, Bury St Edmunds, and was organised by Anita Smith, one of the nurses at the care home.

Dozens of people attended the party which Anita said was a “brilliant” occasion.

“I could not believe how well it went and it was so enjoyable. We had residents, friends and family attend and it was pretty packed. We have had many similar events at the care home but this was the biggest one yet,” she said.

And now £800 has been handed over to the My WiSH Charity, which supports the hospital, following the event.

Anita decided to raise the money for the unit as her father David Pitt, who lives in Great Whelnetham, is being treated for the illness.

She said: “My father is having palliative treatment at the hospital and they have been so brilliant that I decided to raise the money for the cancer unit.

“And one of the nurses at Cornwallis died recently and cancer is a part of most of our lives here at the care home … it’s a big thing for all of us.

“Now we hope to make the tea party an annual event with money raised going to My WiSH.”

Pictured above is Anita Smith with her parents David and Christine Pitt and Sara Caley, a nursing assistant on the cancer unit at the West Suffolk Hospital.