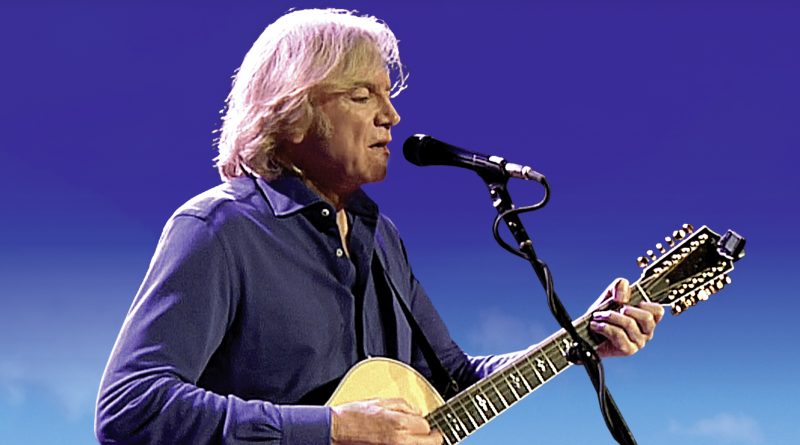 Justin Hayward, the voice of The Moody Blues, is set to undertake a short solo tour of the UK this autumn.

He chatted to Martin Hutchinson, ahead of his sold out show at The Apex, next month.

Justin is probably most famous for ‘Nights In White Satin’ from The Moody Blues album ‘Days Of Future Passed’, which, amazingly, was released over 50 years ago.

“I’ll be doing at least two from that album – ‘Tuesday Afternoon’ and ‘Nights In White Satin’,” says Justin. “It was quite a thing to be celebrate a 50th anniversary.”

That song led to him being asked by Jeff Wayne to sing ‘Forever Autumn’ on his musical version of ‘The War Of The Worlds’ – which was released over 40 years ago. Justin is responsible for many of The Moody Blues’ most memorable songs, such as ‘I Know You’re Out There Somewhere’, ‘Your Wildest Dreams’ and ‘Question’.

Currently putting the finishing touches to the set list for his new solo tour, which follows his successful solo tour last year, Justin says: “I loved doing it and I’m trying to keep my team together while I’m in the mood for touring.”

For the tour, that team includes Mike Dawes and Julie Ragins: “Julie I’ve known for many years and she tours with us in The Moody Blues too. She has the voice of an angel and her voice complements mine. I found Mike by chance. I auditioned many guitarists and he was the second one I saw.

“I knew straight away that he was the one, we fitted together so well and he deserves to be known in his own right. It’s a joy to share a stage with such wonderful young and inspiring talents as Mike and Julie”

The tour will see Justin performing his music acoustically.

”Yes, I wanted to design a show for my acoustic guitars and I can then perform the songs as I demo-ed them originally. I’ll also be telling the stories behind the songs too.”

Even though the tour is showcasing Justin’s solo work, he naturally has to fit some Moody Blues songs in.

“Last year the set was about 60% Moodies and the rest my solo work. Also, I’m looking forward to singing ‘Forever Autumn’ which I only do on my solo shows. I’m bringing my ‘song writing’ guitars from home on the road with me, so the gigs will have the feel and sound of my music room along with the vibe I was feeling when I wrote the songs.”

Justin has noticed a difference in touring as a soloist rather than as part of The Moody Blues.

“Yes, it’s very different. You see, I can hear every nuance of the solo shows and I don’t get to use my acoustic guitars with The Moodies. I really love it. And, I love the chat between songs, telling the stories behind them. It means a lot to me.

“I’m always so thrilled to have the opportunity to tour in the UK, particularly at this time in my career when no one knows what the future holds. I’m really looking forward to this tour,” he says. “It’ll be a great night of music.”

If you are a fan of the Moody Blues, Go Now! The Music of The Moody Blues is at The Apex on September 29. It sees Gordy Marshall, who toured and recorded with The Moody Blues for 25 years, with Mick Wilson, lead singer of 10cc for 20 years, and their band recreate a Moody Blues concert by playing all the classic hits.