Six workmates from the Tesco store, in Newmarket, have helped to raise over £1,000 for one of the wards at the West Suffolk Hospital.

It came after one of their team at the store suffered a stroke back in July last year and was treated by staff on G8, the stroke ward of the hospital, in Bury St Edmunds.

They had initially set a target of £500 but the final result was double that amount with £1,070 being handed over to the My WiSH Charity which supports the work of the hospital. 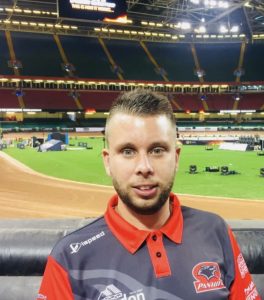 The six, who all work in the backroom of the store dealing with the online shopping demand, decided to carry out the fundraising initiative after their colleague Mark Davy (pictured) had the stroke. They wanted to raise the money for the ward as a way of thanking staff for the care they gave to the 31-year-old.

The run started from the store in Fordham Road and went via the High Street, past the stables and along Exning Road and back to the store.

George said: “We did not expect to get that much money but we were thrilled as Mark had had a tough time. It was out of the blue really, he had the stroke and lost the movement on his left side.

“Everyone did it in under three hours with one doing it in under two hours and two more just over the two-hour mark. We stayed together for the first 10k and we all had our own targets that we wanted to get to but it started chucking it down with rain towards the end of it.”

Mark was on the stroke ward for four-and-a-half weeks after losing the movement in his left arm and left leg.

He said: “I was out and about during the day and I stayed up a bit late but when I went to bed at about midnight it all started and the room started spinning. I had to bang on the wall to get attention from my dad who called the paramedics. All the nurses and staff at the hospital were brilliant along with the physios and I was determined to walk out of the hospital unaided.

“I am starting to walk a bit and try and walk every day between three and four miles and go to see the physios for two hours a week.”

He uses a SaeboFlex, which is a high-profile splint used to support and assist the movement of the hand and arm, and added: “My hamstring is still a bit weak but I am determined to get back to normal since day one and have had long-term goals.”

He paid thanks to his six workmates for carrying out the fundraising initiative along with all the staff on the stroke ward and said he is hoping to return to work by the end of June.

Sally Daniels, fundraising manager for My WiSH, thanked the Tesco colleagues for their fundraising and said: “This is a fantastic amount raised for the stroke unit. The staff work so hard and are really grateful for the donation. They already have a couple of ideas on what to buy which is just great as we love that we can show our donors exactly how their money has made a difference to their local hospital.”