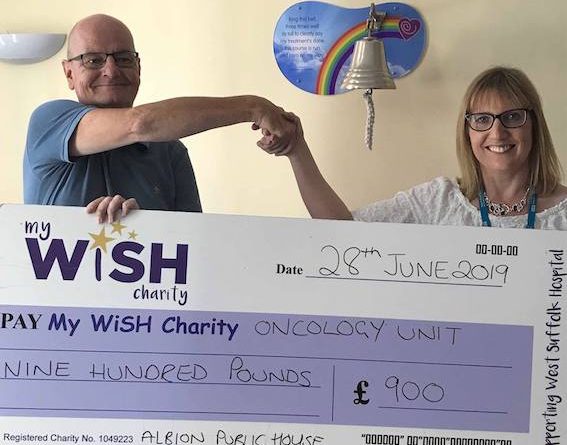 Friends and family donned an array of wigs and assorted hairpieces for the day to support a charity event aimed at raising money for the Macmillan Unit at the West Suffolk Hospital, in Bury St Edmunds. 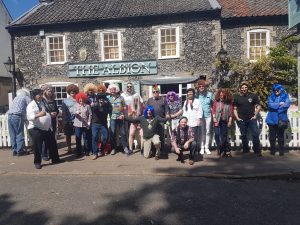 It was organised by Mark Lowther who is being treated for esophagus cancer and the “Wear a Wig for Mark Day” was held at The Albion pub, in Castle Street, in his home town of Thetford.

And along with a raffle which featured an assortment of prizes a total of £900 was raised with the money being handed over to the My WiSH Charity, which supports the hospital.

Mark, who lives in Bury Road with his partner Kirsty Johnson, has had to put his domestic repair business on hold while he is being treated and said he was “delighted” with how the day went and the amount of money raised.

There was music, a barbecue and the town mayor even turned up and volunteered to have wet balloons thrown at him to help boost the funds.

“We had some fantastic prizes which were all weird and wonderful and many local businesses donated.

“I’ve been using The Albion for about 30 years and it was the perfect place to hold the event. The landlord donated the food and everyone said it was one of the best days that they have had, it was brilliant and I’m delighted with how it went.”

The 51-year-old said the idea of the day was a bit tongue-in-cheek.

He said: “I have had chemotherapy and was told of the side effects including the loss of hair but that would not affect me so I thought it would be a good idea to get people together to wear wigs,” said Mark who was diagnosed with the illness back in February this year.

He was violently sick one day coughing up blood and went to see his doctor the following day. 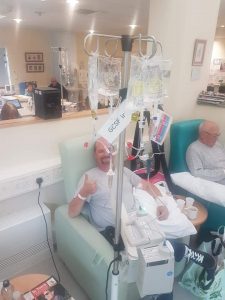 He then had an endoscopy at the West Suffolk Hospital followed by a CAT scan at Addenbrooke’s Hospital, in Cambridge, and has had 48 appointments which have included 126 hours of chemotherapy.

On August 6 he was due back at Addenbrooke’s for an operation to remove the tumour which could be followed by further chemotherapy and possibly radiotherapy.

But inspirational Mark remains upbeat about his situation.

“After all the time I’ve spent at the West Suffolk we just had to do something for them but I will never be able to eat a normal meal again and will have to have small portions.”

And he is hoping to raise more money later this year with ideas of staging a pool or darts marathon at his favourite watering hole.

Pictured above is Mark Lowther with Nicky McKee, the information centre manager for the Macmillan Unit.